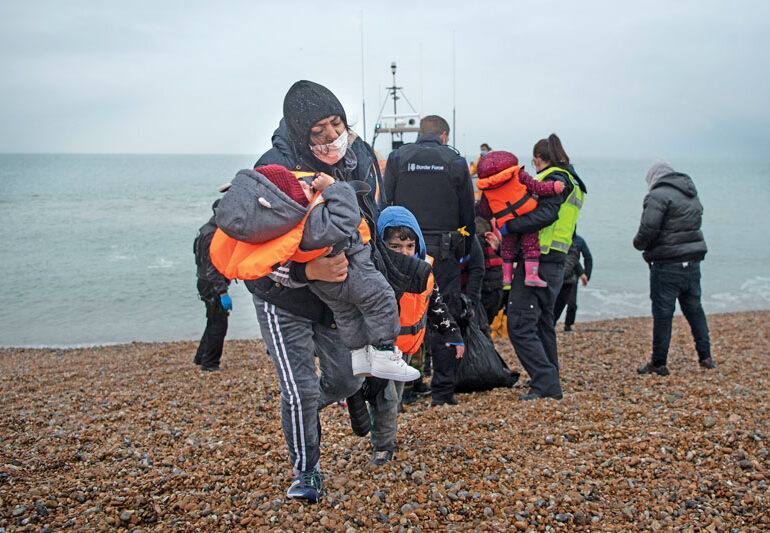 Paris, France – French Interior Minister Gerald Darmanin urged Britain on Monday to open a legal route for asylum seekers in order to prevent people risking their lives by taking small boats across the Channel to England.

‘Great Britain needs to open up a legal immigration route’ because ‘at the moment anyone who wants to ask for asylum has no other choice but to cross the Channel’, Darmanin said in an interview with the RMC/BFM media group.

French officials have already suggested that British immigration officials process asylum requests in northern France from migrants camped out around the major ports on France’s coast.

Darmanin convened fellow ministers responsible for immigration from Germany, the Netherlands and Belgium on Sunday for talks about the Channel migrant crisis, four days after an unprecedented accident saw 27 people drown in the busy sea lane.

They met without Britain which was excluded after a row last week between British Prime Minister Boris Johnson and French President Emmanuel Macron.
Darmanin again blamed Britain for the presence of thousands of migrants in northern France, alleging that more relaxed labour practices on the other side of the Channel were creating a ‘pull effect’ tempting migrants across in hope of finding work.

The four countries agreed to ‘strengthen our operational cooperation’ in fighting the gangs who organise boats and life jackets for groups of migrants to head over the narrow but treacherous sea lane separating France and England.

Many migrants around Calais also say they want to travel to the UK because they speak some English already, or have family and friends in the country.
Around 26,000 people have sailed from France to England this year, leading to severe pressure on the UK government which had vowed to reduce migration after pushing through Britain’s departure from the EU.

Johnson has suggested sending police and border agents to patrol alongside their French counterparts on the beaches of northern France – something rejected by Paris in the past as an infringement on sovereignty.

More controversially, he proposed sending back all migrants who land in England, a move which Johnson claimed would save ‘thousands of lives by fundamentally breaking the business model of the criminal gangs’. France received 80,000 asylum requests in 2020 compared with 27,000 in the UK.

Investigations into last Wednesday’s accident continue, with French police giving no details officially about the circumstances or the identities of the victims. A total of 17 men, seven women and three minors died, with migrants living along the coast telling AFP that the deceased were mostly Iraqis, Iranians and Afghans.