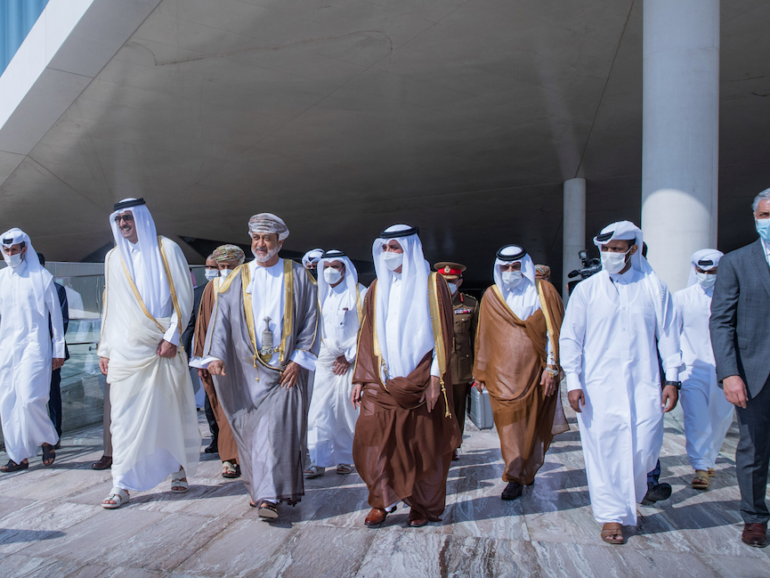 Muscat – His Majesty Sultan Haitham bin Tarik returned home on Tuesday after concluding a two-day state visit to Qatar, which was in response to an invitation by Sheikh Tamim bin Hamad al Thani, Emir of Qatar.

During the visit, His Majesty the Sultan held a round of official talks with Sheikh Tamim. The two leaders discussed aspects of cooperation and means of enhancing fraternal relations to achieve the aspirations of their peoples.

Oman and Qatar issued a joint communique which stated that His Majesty the Sultan and the Emir of Qatar held expanded talks that reviewed bilateral relations and ways of developing these in various spheres. The two leaders also exchanged views on a number of regional and international issues. The talks showed that relations between Oman and Qatar are deep-rooted and their stands identical on regional and international issues. They reflected the two countries’ emphasis on the significance of dialogue in resolving all issues of the region.

The two sides affirmed the leaderships’ strong political will and firm resolve to upgrade all areas of cooperation. This historic visit of His Majesty the Sultan will open new vistas of consultation, coordination and cooperation between the two countries, the communique stated.

His Majesty the Sultan and Sheikh Tamim commended the excellent bonds binding the two countries, notably the great scope of cooperation and partnership. The two leaders reiterated their desire to promote cooperation in the area of clean energy and their keenness to exchange expertise on ways to curb climate change.

The two sides stressed that tangible, diverse opportunities in the two countries constitute strong grounds for consolidating relations, expanding investment opportunities, and establishing partnerships. Additionally, they stressed on augmenting and diversifying the volume of commercial exchange and enhancing the role of the private sector to achieve their common interests.

‘The Sultanate of Oman expressed its pride at the State of Qatar’s hosting FIFA World Cup 2022, affirming Oman’s confidence that Qatar would show unprecedented success in organising the major global event in a manner that reflects the region’s heritage and great potential.’

At the regional and international levels, the two sides agreed on the importance of the role of Cooperation Council for the Arab States of the Gulf in enhancing security and stability in the region. They also underscored the significance of consolidating consultation and coordination of stands at a bilateral level, as well as regional and international arenas, with the prime aim of serving Arab, Islamic and legitimate humanitarian issues – on top of which comes the Palestinian cause – and the need to bolster security and stability in the Middle East and the world at large.

At the conclusion of the visit, Sheikh Tamim bin Hamad Al Thani, Emir of the State of Qatar expressed his heartfelt appreciation for His Majesty the Sultan and his pride at this historic visit.

Meanwhile, His Majesty Sultan Haitham Bin Tarik voiced his deep thanks to Sheikh Tamim and his great appreciation for the hospitality extended to him and his delegation during the visit. His Majesty the Sultan invited Sheikh Tamim to visit Oman.