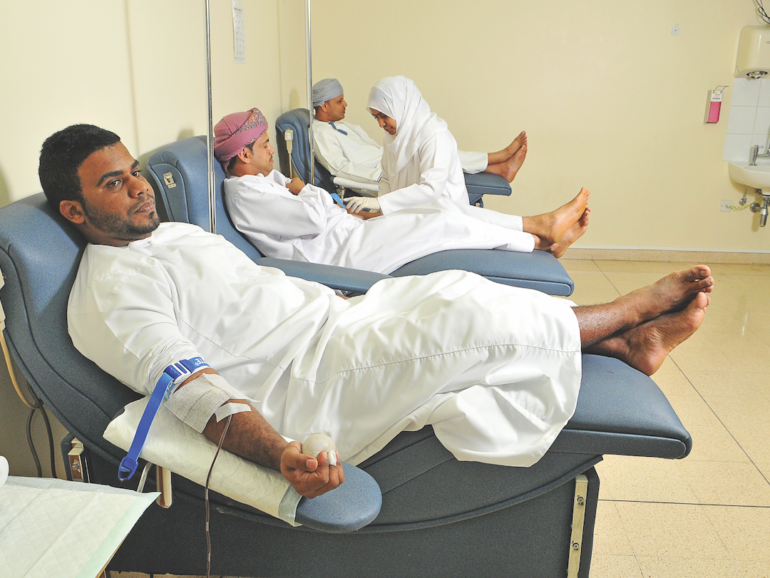 Muscat – Oman has seen the number blood donors increase over the past five years even as the country continues to face a growing demand from patients reflecting the critical role of social responsibility.

To cater to the demand, Central Blood Bank in Bausher will remain open during the National Day holidays from 8am to 8pm.

According to the National Centre for Statistics and Information (NCSI), the number of blood donors increased by 6.7 per cent between 2016 and 2020. NCSI figures show that there were 61,679 blood donors in Ministry of Health’s centres in the five-year period.

Speaking to Muscat Daily, Ahmed bin Hamad al Kharusi, who has donated blood 174 times, said, “Donating blood doesn’t just save lives, but there are health benefits for donors too. People in Oman need to be aware of the importance of blood and platelet donation.”

He informed that blood banks in the wilayats of the sultanate need about 1,500 units of blood every week.
“There is an urgent need to create awareness on the issue and efforts to increase the number of blood and platelet donors in the country,” said Kharusi.

According to Kharusi, it’s always a challenge to reach a wider audience to create awareness when blood donation drives are organised. “Our aim is to make people aware that they should visit the nearest blood bank for donations rather than wait for a campaign.” He informed that donating blood every three months is good for health.

The time for blood donation at the Central Blood Bank in Bausher from Saturday to Thursday is between 8am to 8pm and 3pm to 8pm on Friday.