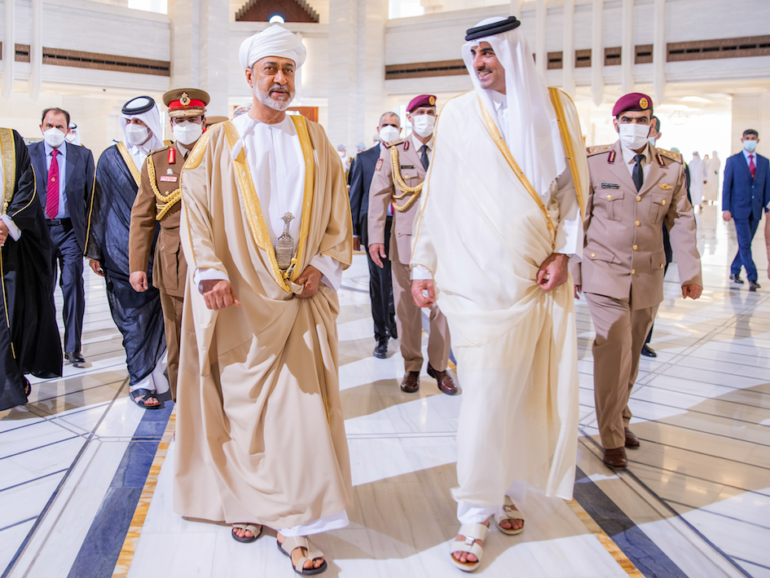 Doha, Qatar – His Majesty Sultan Haitham bin Tarik was given a rousing welcome on his arrival in Doha on Monday with Qatari Air Defence Force jets escorting the sultanate’s Royal Jet as it entered Qatari airspace.

After a short rest at the Reception Hall, His Majesty the Sultan, accompanied by Sheikh Tamim bin Hamad al Thani, Emir of Qatar, joined a motorcade that took them to the Amiri Diwan. There, His Majesty was accorded an official welcome.

Later, His Majesty the Sultan and Sheikh Tamim held a round of official talks at the Amiri Diwan and oversaw the signing of six cooperation agreements.

At the outset of the talks, Sheikh Tamim warmly welcomed His Majesty the Sultan and wished him and the accompanying delegation a pleasant stay.

On his turn, His Majesty the Sultan expressed his appreciation to Sheikh Tamim for the warm welcome and hospitality.

During the talks, the two leaders discussed areas of cooperation between their countries and means of promoting these in various spheres to meet the aspirations of their peoples. The session also reviewed other matters of common interest.

The talks were attended by a number of officials from both sides. Afterwards, His Majesty the Sultan and Sheikh Tamim held a closed-door session.

Earlier on his arrival, the vehicle carrying His Majesty the Sultan and Sheikh Tamim was flanked by a cavalcade and a camelcade that had lined both sides of the street to welcome His Majesty.

The agreement on avoidance of double taxation, and income and capital tax evasion was signed by Sultan Salim al Habsi, Minister of Finance, and his Qatari counterpart Ali Ahmed al Kuwari.

The two sides also signed a memorandum of understanding in the fields of labour and human resources development, signed by Dr Mahad Said Ba’Owein, Minister of Labour, and his Qatari counterpart Dr Ali Said al Marri.

Murshidi and Mahmood also signed agreements on cooperation in the fields of tourism, maritime transport and ports.