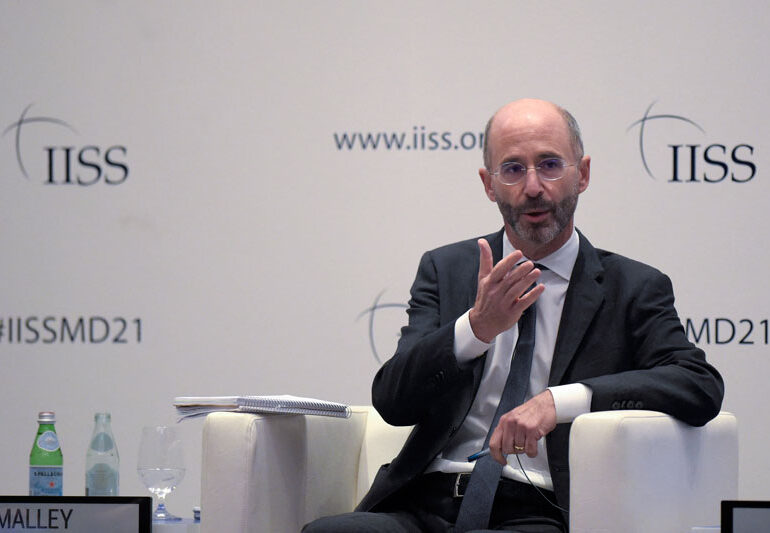 Manama – The US Special Envoy for Iran Robert Malley warned on Friday that Tehran was approaching the point of no return for reviving a nuclear deal after it boosted its stocks of enriched uranium before talks resume this month.

Malley said Iran risked making it ‘impossible’ to gain any benefit from resuming the agreement, which has been on hold since then president Donald Trump withdrew the US from it in 2018.

Last week, with Iran set for talks with world powers in Vienna on November 29, the International Atomic Energy Agency said Tehran had again increased its stockpile of highly enriched uranium.

“The time will come if Iran continues at this pace with the advancements they’ve made, [it] will make it impossible even if we were going to go back to the JCPOA (Joint Comprehensive Plan of Action) to recapture the benefits,” Malley told the 17th IISS Manama Dialogue conference in Bahrain.

The JCPOA was the agreement struck in 2015 under which Iran agreed to clear limits on its nuclear activities in return for an easing of sanctions.

“Iran’s advances are spreading alarm across the region… that’s what’s making the clock tick faster and making all of us say that the time is short for a return to the JCPOA,” Malley said.

On Wednesday, the US and its Gulf Arab allies accused Iran of causing a nuclear crisis and destabilising the region with its ballistic missile programme and support for armed militias.

Malley said the US shared a ‘commonality of purpose’ with rivals Russia and China ‘because we want to avoid that crisis, all of us, the crisis that would be sparked if Iran continues on its current path”.

“And I want to be clear, because there’s no ambiguity about what they seem to be doing now, which is to drag their feet on the nuclear talks and accelerate the progress in their nuclear programme.”

The US envoy said he was not encouraged by the statements from the new Iranian government of President Ebrahim Raisi, which earlier on Friday accused Washington of conducting a ‘propaganda campaign’ against the country. “If they stick to their public pronouncements, unfortunately we’re not headed in the right direction… but let’s wait to see what happens,” he said, pledging that President Joe Biden would honour a revived deal.

“Our intent, our clear intent in coming back into the deal is to stick with the deal because we don’t want to see a nuclear crisis,” Malley said.

Iran had reacted angrily to a US pledge to take its Gulf Arab allies’ interests into account in any revived nuclear deal with their arch rival.

“The US government, which is responsible for the current situation after withdrawing from the nuclear deal, is once again trying to provoke a crisis,” Foreign Ministry spokesman Saeed Khatibzadeh charged.

In a tweet later, Malley said he had a ‘very constructive’ phone call with Russian Deputy Foreign Minister Sergei Ryabkov and Chinese Vice Minister of Foreign Affairs Ma Zhaoxu on the Iran talks. “Our three countries are in strong agreement on the need for a return to full compliance with the JCPOA,” he said.

“We are working together to achieve it by aligning our approaches as we head to the 7th round of talks,” he said.