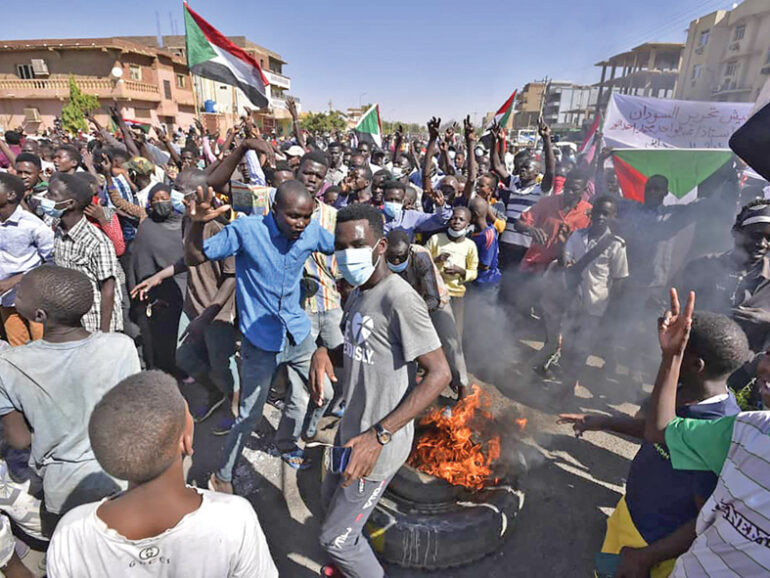 Khartoum – Sudanese security forces have arrested the bureau chief of Qatari-based Al Jazeera TV, the network said on Sunday, a day after the latest crackdown on anti-coup protesters left at least six dead.

Among them were two teenagers, according to a medics’ union.

It was one of the bloodiest days since Sudan’s latest coup took place almost three weeks ago. The putsch has provoked international condemnation and regular protests by Sudanese upset at the derailment of a transition to full civilian rule in a country which has seen very little of it since independence.

‘Security forces raided the house of Al-Musalami al Kabbashi, the Al Jazeera bureau chief in Sudan, and detained him,’ the network said on Twitter without elaborating.

Al Jazeera has given prominent coverage to demonstrations against the October 25 coup but recently it also aired a detailed interview with top general Abdel Fattah al Burhan, one of only two he has granted.

The protests, including by tens of thousands of people nationwide on Saturday, have continued despite a rigorous Internet outage forcing demonstrators to communicate via graffiti and SMS messages.

Among those killed on Saturday was Alsheikh Yasser Ali (18), who was protesting in Khartoum’s twin city of Omdurman to demand civilian rule.

“I attended the body’s autopsy which showed that he took a bullet to the shoulder which hit the heart and the lungs,” the teen’s uncle Zaher Ali told AFP.

“It was all very painful. I almost collapsed in the morgue.”

An independent union of medics said a 15 year old was also among the six, including Ali, killed on Saturday. Five were shot dead while one died from ‘suffocation by tear gas’, said the medics who have recorded a total of 21 killed since the coup.

In a statement, Al Jazeera condemned ‘in the strongest terms the reprehensible actions of the military and calls on the authorities to release Kabbashi immediately’, and to allow its journalists to operate unhindered without fear or intimidation.

Other media outlets besides Al Jazeera have been targeted since the putsch, when Burhan declared a state of emergency, detained the civilian leadership and removed the government installed after the April 2019 military ouster of autocratic president Omar al Bashir.

Burhan, de facto head of state since Bashir fell, has sacked the heads of Sudan’s state television and the official news agency.

In another change, leadership of the council which grants work licences for local and international media reverted to Abdelazim Awad, who led the council during Bashir’s rule.

Ahead of the latest rallies the United Nations called on security forces to show restraint, in a country where more than 250 people had already died in mass protests leading to Bashir’s ouster.

On Sunday, UK Minister for Africa, Vicky Ford, said on Twitter she was ‘deeply concerned at reports of protesters killed in Sudan’ where the people ‘MUST be able to express their views, free from fear of violence’.

Ford added, “The Sudanese military must listen to the huge numbers calling for restoration of the democratic transition.”

Earlier, Washington’s embassy in Khartoum said it regretted the loss of life and injuries to ‘dozens of Sudanese citizens demonstrating today for freedom and democracy’.

Gunshots were heard and tear gas fired as security forces tried to break up the protests, witnesses and AFP correspondents said.

Police denied using ‘live rounds’ and said 39 of their personnel were ‘severely wounded’ in confrontations with the protesters whom they accused of attacking police stations.