Qatar to handle US interests in Taliban-ruled Afghanistan 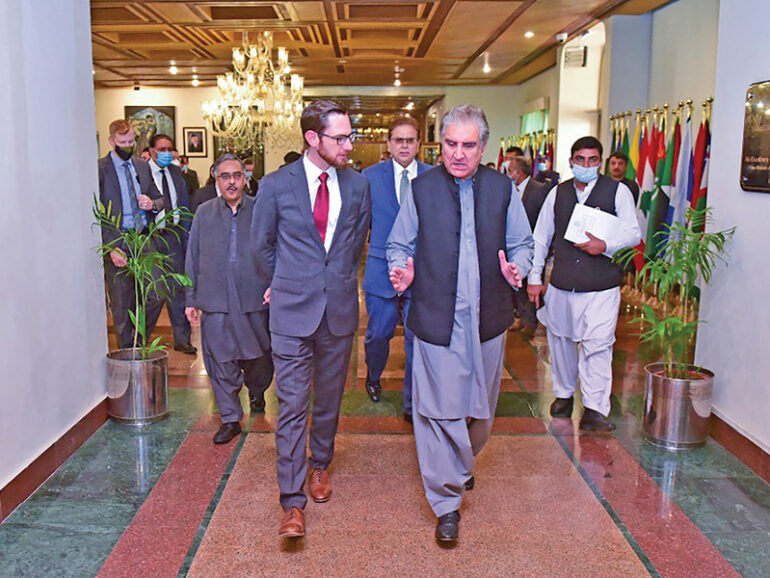 Washington – The United States said on Friday it would set up an interests section in Afghanistan under Qatar, creating a more direct way to assist US citizens and engage with the Taliban after the embassy in Kabul was shuttered.

The step marks the latest diplomatic win for Qatar, the wealthy Gulf state that has increasingly positioned itself as the pivotal US ally on Afghanistan.

US Secretary of State Antony Blinken signed an agreement with his Qatari counterpart to establish Qatar as the US protecting power in Afghanistan, an arrangement in which a third nation handles a country’s interests in the absence of diplomatic relations with the host country.

The United States has voiced cautious optimism about dialogue with the Taliban but has made clear that reopening the embassy – which would imply recognition – is not on the cards.

Qatar, home to a major US military base, has played a significant role both in diplomacy and evacuations as the United States ended its 20-year war in Afghanistan.

Around half of the 124,000 Westerners and Western-allied Afghans flown out of the country in the waning days of the US military involvement transited through Qatar.

“Let me again say how grateful we are for your leadership, your support on Afghanistan, but also to note that our partnership is much broader than that,” Blinken told Foreign Minister Sheikh Mohammed bin Abdulrahman al Thani.

“Qatar is a crucial partner in promoting regional stability,” he said, pointing as well to Qatari assistance to the Palestinians.

Working with the Taliban

Blinken said that the State Department has reached out to all verified US citizens or permanent residents still in Afghanistan with offers to leave, arranging the departure of more than 580 people since the Taliban victory.

But the issue remains politically sensitive and has become the top US priority with the Taliban, although Washington says that any future relationship also would depend on the Islamists addressing concerns on the treatment of women and the role of Al Qaeda.

The US pointman on Afghanistan, Thomas West, met on Thursday in Islamabad with Taliban Foreign Minister Amir Khan Muttaqi alongside representatives of Pakistan, Russia and China – three nations that have encouraged greater cooperation with the militants.

A joint statement called for continued engagement to encourage ‘moderate and prudent policies’.

Qatar has sent 15 charter flights into Afghanistan since the Taliban victory and, along with Turkey, has offered to repair the Kabul airport, which officials warn may soon be in complete disrepair.

“They have a dire need for help, especially when the winter is coming,” Thani said of Afghanistan.

“Abandoning Afghanistan would be a big mistake,” he said.

“We believe engaging with the Taliban, since they are in power right now, is very important for us to ensure that our facilitation for humanitarian assistance is moving smoothly.”

Qatar took on the expanded role on Afghanistan just as Saudi Arabia, backed by other Gulf Arab monarchies including the United Arab Emirates, was trying to isolate it over concerns that included Doha’s relationship with Iran.

UAE Foreign Minister Abdullah bin Zayed al Nahyan on Tuesday met in Damascus with Assad, part of the momentum to restore relations amid a growing conclusion that Assad has won after a brutal, decade-long civil war that has left nearly half a million people dead.

“We hope that countries will be discouraged from taking further steps with the Syrian regime,” Thani said, while saying that others had the ‘sovereign right’ to their own decisions.

“Qatar’s position will remain as it is – we don’t see any serious steps by [the] Assad regime showing his commitment to repair the damage that he made for his own country and for his own people.”

Blinken said that the United States was ‘concerned’ by engagement with Assad.

“And I would simply urge all of our partners to remember the crimes that the Assad regime has committed and indeed continues to commit,” Blinken said.