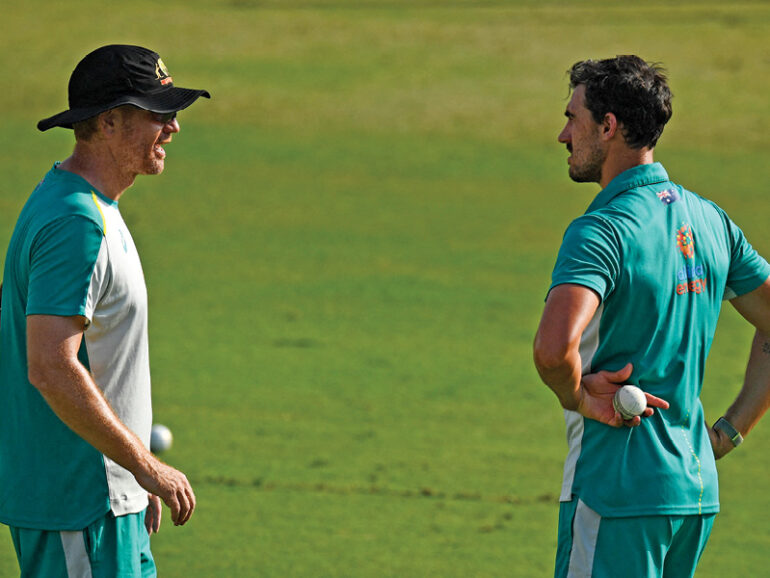 Dubai, UAE – Kane Williamson’s New Zealand eye a second global crown in a single year when they take on Australia at the Twenty20 World Cup final that will witness a new winner on Sunday.

New Zealand and Australia renew their trans-Tasman rivalry in Dubai as both teams look to clinch their maiden world title in the shortest format.

It’s a hat-trick of ICC finals for the once perennial underdogs of world cricket after they outplayed India to win the inaugural Test championship in June.

They beat favourites England in the semi-final to avenge their 2019 defeat in a dramatic 50-over World Cup final at Lord’s when they went down on boundary count after a super over.

Head coach Gary Stead said the Black Caps are excited to take on the Australian challenge in what will be their first ever T20 World Cup final appearance.

“That’s probably a final that I’m not sure too many people would have predicted a month or so ago, Australia and New Zealand,” said Stead.

The Kiwis though have suffered an injury blow after wicketkeeper Devon Conway was ruled out following a broken hand when he punched his bat on his dismissal in the semi-final.

Jimmy Neesham played a key part in the team’s semi-final win over England as he hit 27 off 11 balls to turn the game on its head and win with an over to spare.

“I am sure there will be a bigger outpour of emotion if we manage to get across the line,” he said.

Sunday’s clash will bring back memories of the 2015 50-over final when Australia beat New Zealand by seven wickets to clinch their fifth ODI World Cup.

“They’ve got a bunch of guys who are real match winners,” said Stead.

“And we’re going to have to make sure that our planning, out scouting is right on point and we’ve got really clear plans for their players because they can like rip a game open pretty quickly.”

Australia were in trouble at 96-5 while chasing 177 on Thursday when Marcus Stoinis (40) and Matthew Wade (41) put on an unbeaten partnership of 82 and win by an over to spare.

‘Piece to the puzzle’

Stoinis said a T20 World Cup title will “mean a bloody lot to us.”

“Obviously Test cricket and the Ashes, that’s what we grew up when we played. Then the transformation of T20 cricket. It’s not a hit and a giggle anymore in terms of the pressure,” said Stoinis.

“I don’t think many people gave us a chance leading into this tournament apart from the players and coaching staff. So it’s definitely going to mean a bloody lot to us and we will be super proud when we bring that home to Australia.”

Coach Justin Langer said: “We have got such a rich history and it’ll be nice to add this piece to the puzzle.”

Key will be the form of opener David Warner who has plundered 236 runs at the tournament.

Langer lauded the Black Caps for their brand of cricket and said the Aussies will have to bring their best for a maiden title.

“The way New Zealand have gone about their business for the last few years has been outstanding,” said Langer.

“They are a really good bunch of blokes. They get on with the job and get it done. We have to be at our best like we have been throughout this tournament to beat New Zealand.”

Australia, who have won the 50-over World Cup on a record five occasions, have never triumphed in the final of the sport’s shortest format in six attempts.

But the baby-faced Adam Zampa, who stands at just 1.75m (5ft 7ins), is increasingly being tipped as the man to end Australia’s drought.

Only Sri Lanka leg spinner Wanindu Hasaranga can boast better figures with 16 wickets in eight matches at a 9.75 average and 5.20 economy rate.

Zampa played a crucial role in the semi-final win over Pakistan, dismissing in-form skipper Babar Azam in figures of 1-22 in his four overs.

He had already claimed a career-best 5-19 in the group win over Bangladesh.

“I’ve always been underestimated,” said Zampa who admits to feeding off his relatively low-key status.

“Even as a 15 or 16-year-old growing up in the country, there was always a city guy that’s better than me or there’s always been someone that turns their leg-spinner more than I do.

“Even after this tournament, there’ll be another series that comes up and I’ll be underestimated again. I thrive off that.”

Zampa may have arrived at the World Cup under the radar compared to the likes of high-profile David Warner, Steve Smith and Mitchell Starc, but he is his own man.

On Australia’s limited overs tour of England last year, he helped teammates through the rigours of bio-bubble life by passing on his fondness for whisky.

“We have a whisky club. At night people will bring different bottles. Some like Japanese. I like Scottish Highlands,” Zampa told the BBC.

“Pat Cummins and Mitchell Starc have started to enjoy it and a few other guys are starting to dabble.”

Zampa even has a tattoo of a whisky bottle on his wrist.

He has also adopted a vegan diet, once appearing in advertising for People for the Ethical Treatment of Animals (PETA).

“I’m not vegan to help my performance,” he told the BBC.

“I did it because I care about animals and the environment. It’s really easy for me because I’m passionate about it.”

Zampa also has a passion for on-off hairstyles. In the West Indies this year, he shaved off his blond locks.

It was the second time in his life that he had taken such drastic action. The first close shave was when he was eight.

“When I was eight years old I went through a little phase of changing my hair colour,” he recalled.

“I actually had red hair, went in the pool, it went pink and I cried until my mum shaved it off.”

New Zealand skipper Kane Williamson on Saturday said the team has “exciting talents” as they bid for a maiden Twenty20 World Cup title after losing Devon Conway to freak injury.

Tim Seifert is set to take over the wicketkeeping duties in Sunday’s final against Australia in Dubai.

Conway, who broke his hand after punching his bat in an angry outburst following his dismissal in the semi-final win over England, was a second blow after the Kiwis lost Lockie Ferguson ahead of their opening match in the tournament.

Conway had made 129 runs at the event with an average of just over 32.

Crucially, his ability behind the stumps had allowed the Kiwis to draft in an extra bowler after the group loss to Pakistan.

“Here is a good mix of youth and experience, and some of these younger players that keep coming through are really exciting talents,” Williamson told reporters.

“Obviously the loss of Devon is a big one. He’s been a big part of all formats for us. It’s a disappointing and really freak thing to happen.

“But for us, it’s keeping our focus on the task, and all the players are really excited with the opportunity tomorrow to go out, and try to improve and adjust to what will be new, which is a different opposition and a different venue.”

New Zealand have been the team to beat in recent times after they ended up runners-up in the 2019 50-over World Cup and clinched the inaugural Test championship in June this year.

Both New Zealand and Australia have never won a T20 World Cup and the Kiwis will be playing in their first ever final in the tournament.

“It would be some achievement,” Williamson said on the prospect of winning two world trophies in a single year.

“But you know, where it stands at the moment is there’s a game of cricket to play, and for us, it’s focusing on that and focusing on our cricket and looking to go out there and implement those things that are important to us.”

The trans-Tasman rivals have a rich history of exciting contests and their title clash brings back memories of the 2015 ODI World Cup final in Melbourne when Australia outplayed New Zealand.

“I suppose the fact that we are sort of neighbours creates a bit of that, in a number of different sports as well,” Williamson said of the rivalry.

“So it is always a great competition, great occasion, when we play each other. So both teams I think are really excited at that prospect tomorrow.”

New Zealand have depended on their new-ball attack of Tim Southee and Trent Boult to unsettle opponents in the tournament.

But Williamson was asked on his team’s preparations to tackle Australia leg-spinner Adam Zampa who has 12 wickets.

“For us, we want to bring our focus to the cricket that we want to play and make sure that that’s the most important thing,” he said.

“And you know, go out there and enjoy the occasion and take it on in our style.”