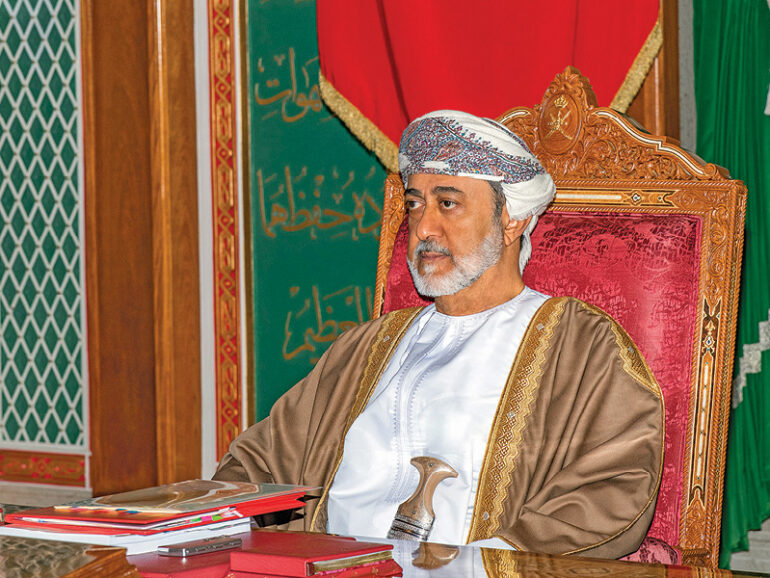 Muscat– His Majesty Sultan Haitham bin Tarik chaired a meeting of the Council of Ministers at its premises in Muscat on Tuesday.

At the outset of the meeting, His Majesty the Sultan gave thanks and praise to the Almighty Allah for the riches with which He has endowed Oman and its people. He prayed to the Almighty Allah to protect Oman, its citizens and residents, and to perpetuate the bounties of health, fulfilment and tranquillity for all.

Following that, His Majesty the Sultan reviewed domestic developments. He underscored the significance of collaboration of efforts in all institutions of the state towards accelerating the development of government services, pursuing implementation of the digital transformation initiatives, forging comprehensive measures to address challenges and utilising available capacities and resources to keep pace with current and future situations. He also laid emphasis on fostering communication and interaction with society to meet its aspirations.

At the meeting, His Majesty the Sultan referred to the outcome of performance assessment of government institutions for the year 2020-2021.

He took note of the efforts made in all sectors to upgrade performance and provide the best services to keep abreast of developments in the interest of the public. In this context, His Majesty the Sultan said that an independent unit reporting to him personally will be set up to measure the performance of government institutions and ensure their continuous assessment. The unit will also be mandated with proposing mechanisms to upgrade the performance of government institutions, gauging service quality and customer satisfaction.

His Majesty the Sultan gave directives to initiate a unit to support decision-making. The unit will report to the Secretariat General of the Council of Ministers and will be tasked with upgrading the standard of performance through efficient decision-making.

In pursuance to His Majesty the Sultan’s attention to employees of the State’s Administrative Apparatus and to motivate them to improve performance in the next stage, His Majesty the Sultan gave directives to promote a
segment of government employees under the Civil Service System and other civil systems, namely those eligible for promotion since 2011. The promotion of this segment takes effect from 2022.

In continuation of Royal attention to social and economic aspects and to the services rendered to citizens, His Majesty the Sultan gave directives to stabilise vehicle fuel prices in accordance with the rates of October 2021 as the maximum ceiling. The government will bear the difference from any excess resulting from oil prices till the end of 2022.

To incentivise the national economy and stimulate the investment climate, His Majesty the Sultan ordered the cancellation of a set of fees imposed on activities of some sectors, and reduction of fees in certain other sectors.
At the conclusion of the meeting, His Majesty the Sultan touched on other areas of interest to citizens and residents and gave his Royal directives accordingly.

His Majesty the Sultan wished success in serving the good of “this dear homeland and its loyal people”.