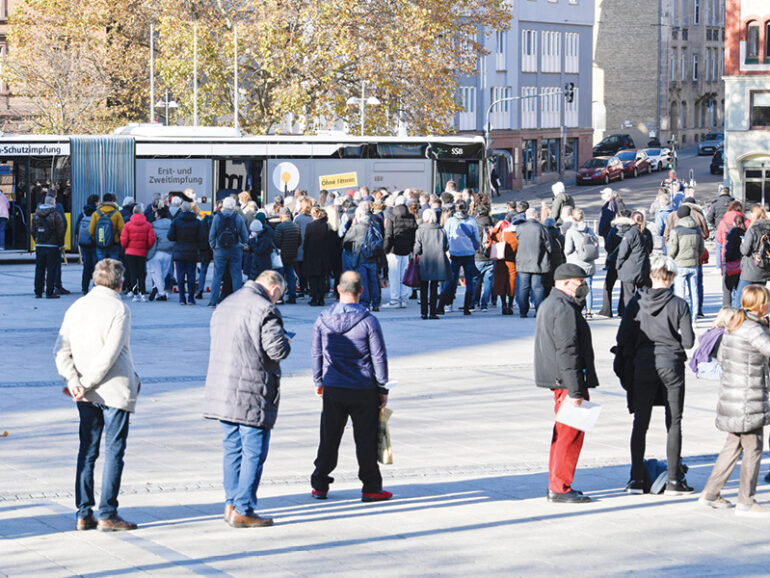 Radeberg – The eastern German state of Saxony may have ordered tough rules on the unvaccinated to push them to get the COVID-19 jab, but shop assistant Sabine Lonnatzsch (59) is unmoved.

The new rules are ‘discriminatory’ because they are ‘pushing the unvaccinated further into a corner’, she tells AFP.

She won’t change her mind about getting inoculated – she just won’t go to restaurants or events anymore.

“I’ve had corona cases in my family and in my eyes it is nothing more than a bad flu,” she says.

With COVID-19 infections rocketing in Germany, Saxony this week became the first to largely exclude unvaccinated people from indoor dining, cinemas and bars.

The new rules, likely to be emulated by other states in the coming weeks, are designed not only to reduce the spread of COVID-19 but also to encourage more people to get inoculated.

But Lonnatzsch is not the only one resisting the jab in the town of Radeberg in Bautzen district, which has one of the lowest vaccination rates in the country at just 45.7 per cent.

The clothing store No 1 Mode where she works has a sign in the window that lets customers know that all are welcome – regardless of vaccination status.

Across the town square, the co-owner of Cafe Roethig also has no plans to get the vaccine.

Like many people in the region, Carola Roethig (58) is ‘not convinced’ by the jab because ‘it was developed in such a short space of time’.

The district of Bautzen has one of the highest incidence rates in the country at 645.3 cases per 100,000 people, but Roethig is not worried about catching the virus.

The new rules are ‘definitely bad for business’, she says at the cafe’s bakery counter, which is lined with untouched fresh cakes, tarts and iced donuts.

“Many of our customers are not vaccinated, so we are losing income, because fewer people are coming in,” she says.

The rules are also bad for her personal life.

“I’m not allowed to go to a restaurant in the evening and have a nice dinner with my husband. I don’t think it is right.”

Outside the cafe, 40 year old Susan feels the same.

‘Nothing would convince me’ to get the jab, she says, without giving her last name.

“I see no sense in it because [vaccinated people] can still get the disease and infect others.”

The new rules come as new infections surge in Germany, with the national incidence rate reaching 213.7 cases per 100,000 people over the past seven days on Tuesday – a record since the pandemic began.

But with just 67 per cent of the population fully jabbed, ministers say encouraging more people to get vaccinated is key to bringing the numbers down.

Outside Radeberg town hall, a modest queue of people formed for a vaccination event organised to encourage more people to get the jab.

Kitchen assistant Mirmirza Kabirzada (36) had previously hesitated because, “I heard that many people died in Norway and others got a fever, so I was a little bit afraid.”

But with the numbers rising so dramatically, “Now I realised this is very important,” he says.