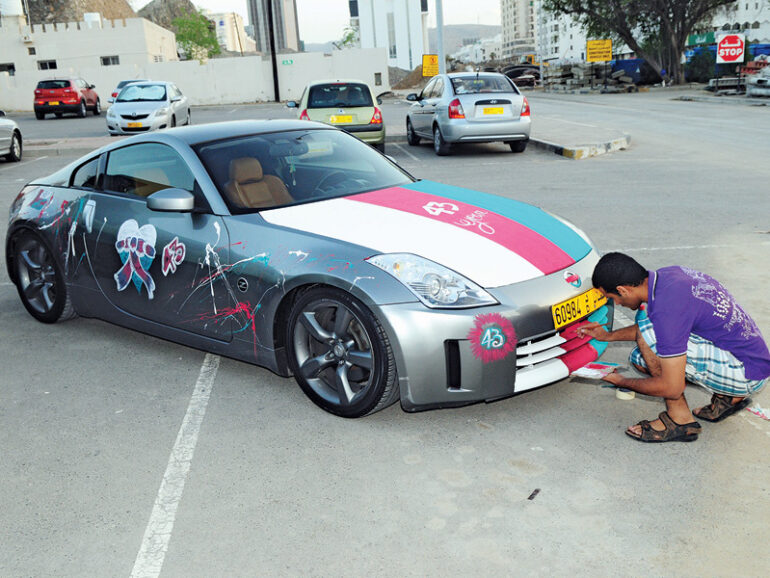 Muscat – November has special significance for the sultanate owing to the National Day celebrations during the month when cars decorated in green, red and white are a common sight in every street.

As the country prepares for the 51st National Day celebrations, citizens – and resident too – are gearing up to decorate their cars in a show of patriotism and loyalty.

Decorations mostly include national symbols and portraits of His Majesty the Sultan, which are monitored by Royal Oman Police.

‘Motorists can decorate their vehicles with stickers in commemoration of 51st National Day from November 8 to 30,’ ROP stated on Monday, issuing guidelines for motorists on vehicle decorations.

According to ROP, stickers can be placed on the body of vehicles but not extend to the front windscreen, windows, number plates and lights. ‘Images are allowed on rear windscreen as long as it doesn’t block the driver’s view,’ ROP stated.

According to the statement, fabric decorations are forbidden on the engine hood. ‘Derogatory and offensive language should not be used and the colour of the vehicle should not be affected by decorations. Posters should be limited to pictures and phrases related to the occasion.’

Saada al Nuumani, who decks out her car every year for the occasion, said, “This year is no exception. I was just waiting for ROP to announce when we can start decorating our cars.”

Following the announcement, Saada will take her car to a body shop in Al Khuwayr to adorn it with stickers and flags. “Doing this makes me happy. It gives me a sense of belonging to the nation that has done so much for its people.”

Dressing in clothes in the national colours with badges and brooches marking the day also add to the sense of patriotism among citizens and residents alike. Since the beginning of the month, many outlets across the country have been stocking and displaying items that are in demand for National Day.

For Amerat resident Abdullah al Khaldi, the National Day celebrations are incomplete without raising a flag at home and a green, red and white scarf around his neck. “These items distinguish the National Day from other days of the year, so I make sure to buy them. These show that I am grateful for everything Oman has done to us.”