Iraq PM calls for restraint after drone strike on his home 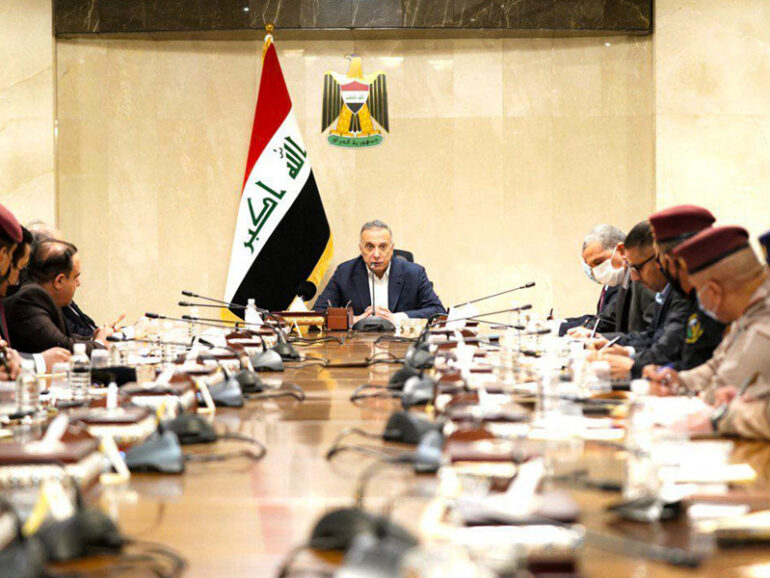 Baghdad, Iraq – Iraqi Prime Minister Mustafa al Kadhemi said he was unhurt and appealed for ‘calm and restraint’ after a drone attack on his residence early on Sunday heightened political tensions in the war-scarred country.

The attack in Baghdad’s Green Zone was the first to target the residence of Kadhemi, who has been in power since May 2020. It came as Iraq’s political parties negotiate alliances over who will run the next government after elections last month.

That vote saw the Conquest (Fatah) Alliance, the political arm of the pro-Iran Hashed al-Shaabi paramilitary network, suffer a substantial decline in its parliamentary seats, leading the group to denounce the outcome as “fraud”.

The big winner, with more than 70 seats according to the initial count, was the movement of Moqtada Sadr, a Shiite Muslim preacher who campaigned as a nationalist and critic of Iran.

Security sources said three drones were launched, but two were shot down. They were “launched from a site near Republic Bridge” which crosses the Tigris River in Baghdad, before flying towards the Green Zone, one source said.

No group has yet claimed responsibility for Sunday’s attack, which left two bodyguards wounded, according to a security source.

Gunfire sounded and smoke was seen rising from the Green Zone area after the strike.

Photos issued by Kadhemi’s office showed debris strewn on the ground below a damaged exterior stairway and a door that had been dislodged.

In a tweet, Kadhemi called “for calm and restraint on the part of everyone for the good of Iraq”.

“My residence has been the target of a cowardly assault. Praise God, I am fine”, he then said in a short video shared on social media.
His office described the attack as a “failed assassination attempt”.

The United States, which has around 2,500 troops in the country, said it was “relieved to learn the Prime Minister was unharmed”.

“This apparent act of terrorism, which we strongly condemn, was directed at the heart of the Iraqi state,” State Department spokesman Ned Price said.

Iraq’s President Barham Salih, who holds a largely ceremonial role, said the attack “requires a united position in confronting the evil actors trying to mess with this country’s security and the safety of its people.

“We cannot accept dragging Iraq into chaos and to a coup against the constitutional system.”

A large number of security forces were deployed in and around the Green Zone, which also hosts the US embassy and is frequently targeted by rocket attacks.

The United Nations Assistance Mission for Iraq (UNAMI) said it “strongly encourages all sides to take responsibility for de-escalation and to engage in dialogue to ease political tensions, upholding the national interest of Iraq”.

The influential cleric Sadr said the attack was “against Iraq and the Iraqi people”.

It came during a period of soaring tensions over the results of the October 10 elections, the fifth since the 2003 US-led invasion ousted dictator Saddam Hussein with the promise of bringing freedom and democracy.

Hundreds of Hashed supporters clashed with police on Friday while protesting near the Green Zone to vent their fury over the preliminary result.

One protester died of injuries in hospital, according to a security source, while a Hashed source said two demonstrators were killed.

Several hundred supporters of pro-Iranian groups returned to the edge of the Green Zone on Saturday to protest, and some burned a portrait of the prime minister, whom they called a “criminal”.

The pro-Hashed protests are aimed at strengthening its negotiating position during the coalition bargaining process, Iraqi political analyst Ihsan al-Shamari has said.

According to initial tallies, the Conquest won around 15 of the 329 seats, down from the 48 it held previously, which made it the second-largest bloc.

Kadhemi brought forward the ballot, originally planned for next year, in a concession to anti-government protests over endemic corruption, the influence of Iran, unemployment and failing public services.

Activists accuse the Hashed’s armed forces — whose 160,000 fighters are now integrated into Iraq’s state security forces — of being beholden to Iran and acting as an instrument of oppression against critics.

Other drone attacks in Iraq have occurred over the last few months particularly against American interests.

Officials in the United States allege Iran has supplied drones used in attacks by its allies around the Middle East.