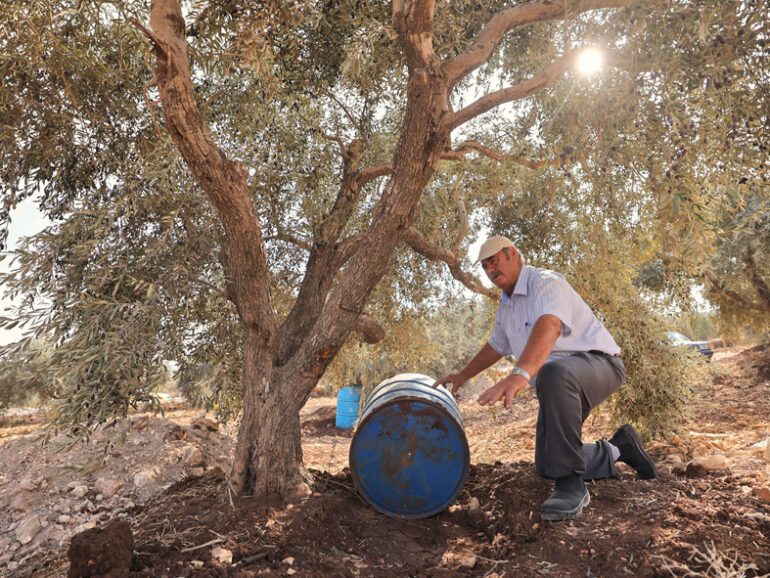 Asira al-Shamaliya, Palestinian Territories – During the recent olive harvest, Palestinian farmer Dalal Sawalmeh raked her fingers through the silvery green leaves of her family’s trees but said there weren’t as many olives cascading to the ground.

Like many farmers across the occupied West Bank, Gaza Strip and Israel, she blames climate change for impacting the iconic gnarled trees that have shaped the Holy Land for centuries.

This year her trees produced less than half their usual yield and “not all the trees bore fruit,” the 38-year-old said near her West Bank village of Asira al-Shamaliya.

Palestinian and Israeli farmers both say the once reliable two-year olive cycle – where a bountiful harvest is typically followed by a weaker one the next year – has been disrupted.

Last winter was exceptionally warm and dry, the spring brought an uncommon cold snap, and through the year rain fell in spurts or downpours.

“The changes are very obvious,” said Hazem Yaseen, the mayor of Asira, where olives have been cultivated for at least 500 years.

Israeli and Palestinian olive growers are now trying to adapt to a heating planet – each in their own way.

High-tech Israel, at the government-funded Volcani Center for agricultural research, is seeking a genetic “supertree” to withstand climate change.

In an orchard outside Tel Aviv, plant sciences expert Giora Ben-Ari (49) is testing 120 olive varieties from around the world for heat resistance.

While the Israeli Barnea shows good oil yield even after a hot summer, another, the Suri strain originally from Lebanon, produces quality but not quantity when the sun beats down, he said.

“We still didn’t identify one super cultivar that shows resistance in all parameters,” he said at the institute where he is also testing the benefits of added shade or irrigation during critical growth stages.

“It’s not that the olive is so sensitive suddenly,” Ben-Ari said. “Other fruit trees are much more sensitive to temperature.

“However, the olive in general is planted in marginal lands and therefore from the beginning it doesn’t have ideal conditions, and therefore every change also affects the yield.”

‘Tree of the poor’

To cope, some aim to do more with less. In Asira al-Shamaliya, 52 farmers have banded together to buy a $300,000 Italian olive press to cut down on oil lost to leaky old machines.

One of the investors, Abdul Salam Sholi, 63, said he has also pruned his trees to help them thrive with less water.

“The olive tree is the tree of the poor,” he said. “You can have a tree with no expenses.”

Only about five per cent of the 88,000 hectares of olive trees farmed by Palestinians are irrigated, said Fares Gabi, a retired Palestinian olive expert.

Mayor Yaseen also said about a fifth of Asira’s land is in the so-called Area C, where Israel holds full control under the 1995 Oslo Accords.

The Israeli military built a base on those lands and Yaseen said he was wounded last year during clashes with Jewish settlers.

“The two are a threat,” Gabi said. “The settler influences the land and so does climate change.”

Some Palestinian farmers are experimenting with irrigation despite the high cost.

Mohammed Amer Hammoudi, 67, said US assistance helped him start irrigating in 2010, and he kept up the practice even after the Trump administration cut aid to Palestinians.

Water costs him as much as 10 shekels ($3.17) a cubic metre, at least six times what an Israeli farmer pays. Trucking the water to his land costs Hammoudi another 15 shekels per cubic metre, he said.

“The water is very expensive, but if you continue using this system, it gives you new tree branches,” he said.

Hammoudi has managed to triple his return, and he now hopes to lower his water costs with a newly built rainwater catchment tank.

His experiment is catching on. Dalal Sawalmeh watered 30 of her 150 trees in July and August using metal barrels with small holes punched into their bases.

Still, she said, even her improved harvest was so slim that she picked her olives with her family rather than hire workers.