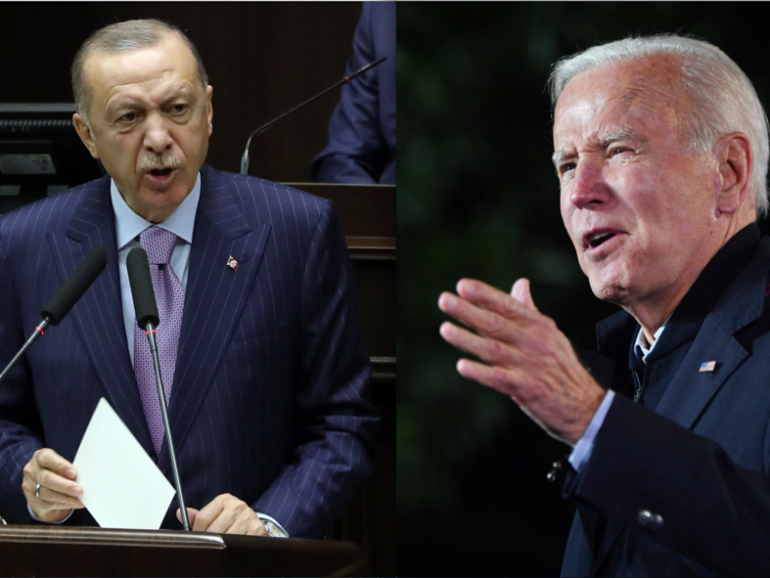 Erdogan’s comments to reporters on board his return flight from a trip to Azerbaijan came after the White House released Biden’s schedule at this weekend’s G20 summit in Rome that included no meeting with the Turkish leader.

“The agenda for Rome and Glasgow appears to have changed,” Erdogan was quoted as saying.

“We are likely to meet in Glasgow instead of Rome.”

The COP26 UN climate conference opens in the Scottish city on Sunday and runs to November 12.

The meeting, which would be the two leaders’ second since Biden was elected president, comes with Turkey seeking compensation after Washington kicked Turkey out of its F-35 fighter jet programme for buying a Russian missile defence system.

The meeting would also come on the heels of a new diplomatic spat that saw Erdogan threaten to expel the US and nine other Western ambassadors over their support for a jailed Turkish civil society leader.

Erdogan, who accused the envoys of meddling in Turkey’s affairs, walked backed the threat after the embassies issued statements pledging to stay out of Turkey’s domestic affairs.

Erdogan has had a rocky relationship with Biden, who he last met on the sidelines of a NATO summit in Brussels in June.

Turkey’s 2019 purchase of a Russian S-400 defence air system has been an irritant on ties, which saw Washington block Ankara’s plans to purchase about 100 next-generation US F-35 planes.

Erdogan has insisted on compensation, saying Washington could pay back at least part of the $1.4 billion advance payment Turkey made for the F-35s through the delivery of older-generation F-16 fighter jets.

The F-35 issue will be the most important topic in his meeting with Biden, Erdogan said, adding that he would have a chance to directly confirm if Washington was willing to return the money through F-16 deliveries.

If so, he said, “we will have worked out an agreement.”

Any military sales would have to be approved by Congress, where anti-Turkish sentiment is strong because of Erdogan’s record on human rights.