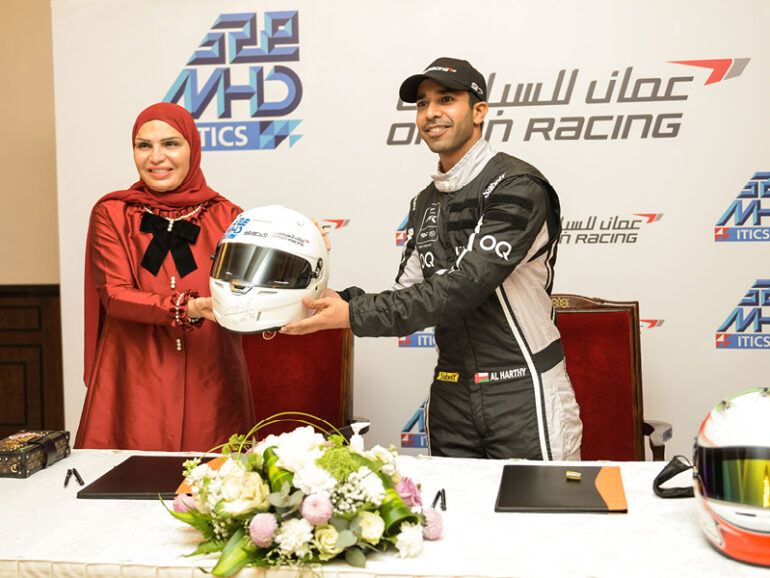 Muscat – Photos and video clips of Ahmad al Harthy proudly holding up his trophy on the podium of the Fanatec GT World Challenge Europe Powered by AWS Endurance Cup [formerly known as the Blancpain GT Series] at Circuit de Barcelona-Catalunya, Spain, from a few weeks ago are fresh in the minds of motorsports fans in the sultanate.

Finishing on the podium and flying the sultanate’s flag at the top-level racing championships is not new for the 40-year-old experienced Omani star.

In Barcelona, Ahmad and his teammates Charlie Eastwood and Giacomo Petrobelli, claimed the third place in the Pro-Am class of one of the top European endurance races to conclude a coronavirus pandemic-interrupted season on a high.

A role model for Omani youth, Ahmad’s energy and enthusiasm for motorsports is amazing and the passion to excel at the top keeps him getting stronger and stronger.

As the sultanate marked Omani Youth Day on Tuesday, one of Oman’s leading business houses, Mohsin Haider Darwish (MHD), joined hands with one of the sultanate’s best-known sportspersons for an exciting journey together.

Ahmad, undoubtedly, can inspire the Omani youth as he has a string of achievements to boast about.
Financial backing and corporate support are essential elements to drive campaign of top-class endurance racers and it is this very fuel that has been provided by MHD-ITICS, the Infrastructure, Technology, Industrial and Consumer Solutions cluster of MHD LLC to Ahmad following a signing ceremony held at Al Bustan Palace – A Ritz-Carlton Hotel on Tuesday.

The partnership between Ahmad and MHD-ITICS will last at least until the end of 2022 and both he and Honourable Lujaina Mohsin Haider Darwish, chairperson of MHD-ITICS, were delighted about the new association.

Attended by a large delegation of MHD-ITICS senior management, including its CEO, Jayaprakash Menon, the deal augurs well for the motorsports fraternity in Oman.

Speaking at the event, Ahmad was hesitant to reveal plans for the next season but as he has been doing in recent times, confirmed that ‘the championships and the series we plan to race in the coming season will be world-class’.

Ahmad told Muscat Daily, “We have set a high bar of performances over the years. Having raced in some of the biggest European endurance racing series, my aim is to target top European series in the coming season. “I still have the speed and the results have been encouraging for me. It gives me a lot of confidence and I know I still can compete at the top. I love representing my nation and am proud to win laurels for Oman.”

Hon Lujaina has been leading a resurgence of sorts in the Oman’s sports scene. With her keen interest in developing not just women sports, but also contribute to the Omani youth and sports in general, through her corporate backing, she is eager to make an impact.

A leading businesswoman and the first elected woman board member of the Oman Football Association, Hon Lujaina, said, “We are proud to associate ourselves with an exemplary Omani
sportstar in Ahmad al Harthy, who has brought pride to Oman on the racing circuit. He is a role model for Omani youth and has created a name for himself across the globe.

“We plan to have a relationship beyond just sponsoring him in the races. We would like to raise awareness and gain exposure abroad for MHD-ITICS and its brand, and there could be no better brand ambassador than Ahmad al Harthy.”

Considered to be one of the most powerful Omani business women, Hon Lujaina added, “Ahmad represents our company’s values to a large extent. “His passion for the sport is like how we drive our
company’s performance and we too persevere to be the leaders in the market just as he aspires to lead and win races.”

Ahmad said ‘the signing of a deal with MHD-ITICS ahead of the start of next season is a big boost’ as ‘such deals help me figure out my season’s campaign and decide on what races and series are best to compete in for me’.

“The partnership means a lot to me as this company has been supporting some of the top sportspersons like Ali al Habsi. This agreement encourages us to chase our goals together with the same passion and pride. Ultimately, we both wish to fly the sultanate’s flag high in the season ahead,” he added.

At the signing ceremony, Hon Lujaina put a MHD-ITICS logo on Ahmad’s driving gear while the racing star presented her a helmet, with his autograph.

Ahmad was a top-four GT class finisher in his maiden campaign in the Asian Le Mans Series, a race winner on his return to British GT in August and a podium finisher in the ‘Road to Le Mans’ in France
before the third-place finish in Barcelona.