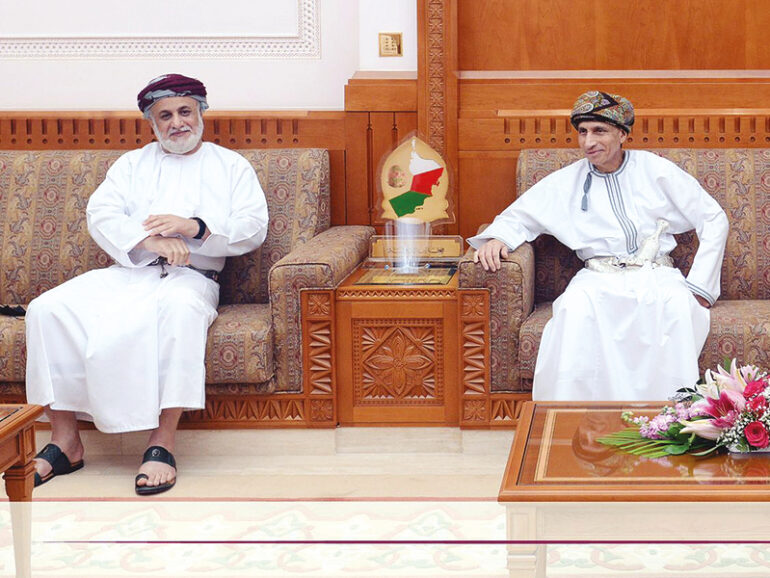 Muscat – H H Sayyid Fahd bin Mahmoud al Said, Deputy Prime Minister for the Council of Ministers, and a number of cabinet members toured the premises of the State Council and the Majlis A’Shura on Monday.

H H Sayyid Fahd was received at the State Council building by H E Sheikh Abdulmalik Abdullah al Khalili, Chairman of the State Council. At Majlis A’Shura, he was received by H E Khalid Hilal al Maawali, Chairman of Majlis A’Shura. The visit was in line with coordination efforts between the Council of Ministers and Council of Oman on matters serving the public interest.

During the visit, H H Sayyid Fahd commended the role of the State Council and Majlis A’Shura during the recent adverse climatic condition. He also hailed the efforts exerted by citizens in all parts of the sultanate as they stood by state institutions and private sector establishments in dealing with the situation.

H H Sayyid Fahd valued the role of non-governmental organisations and charities in lending help to people whose properties were damaged. These efforts and measures to restore normalcy received the commendation of many countries around the world and they highlighted the value of solidarity that distinguishes Omani people.

H H Sayyid underscored the significance of continuous coordination between the Council of Ministers and Council of Oman to achieve the level of cooperation needed to implement economic and social plans and programmes.

He pointed out that the government places cooperation between the two institutions on top of its priorities, since the visions and the studies they draft contribute directly to the country’s comprehensive development.

H H Sayyid Fahd stressed the importance of the current period which, he said, is witnessing challenges that require more efforts to safeguard the country’s gains, achieve further progress and increase social awareness.

It was agreed during the meeting to activate the role of a committee tasked with coordinating between the State Council and Majlis A’Shura so that it plays a greater role in addressing the requirements of the current stage of development.

The chairmen and members of the State Council and Majlis A’Shura expressed their appreciation for the government’s cooperation with them and pledged to work more closely to enhance the country’s development.