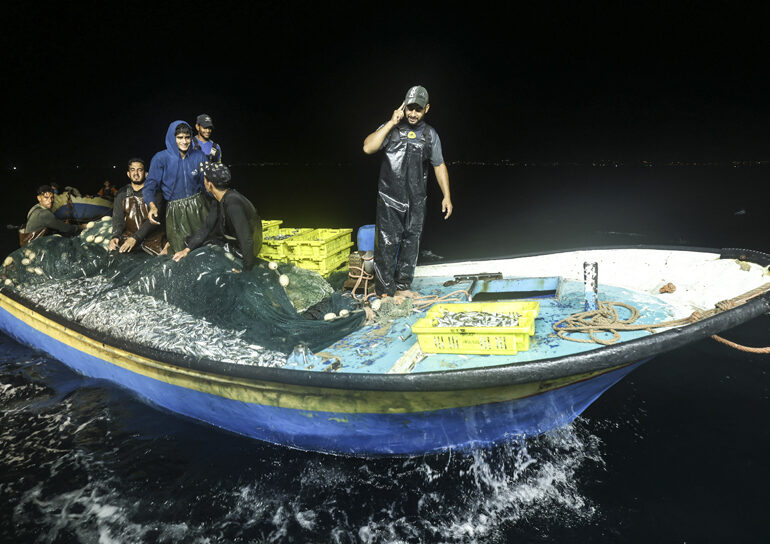 Gaza City, Palestinian Territories – Crashing through the Mediterranean waves at sunset, Palestinian fisherman Mohammed al Nahal leads a convoy of rickety boats out for another risky night under the Israeli blockade of the Gaza Strip.

Forced to stay close to shore due to Israeli restrictions on powerful engines, the men complain they must seek a catch from overfished shallow waters with declining stocks.

“If we catch 200 kilos of sardines, that would be great,” Nahal says. “But we can also come back empty-handed.”

High prices of fuel in the enclave means that fishing operating costs are crippling, making them stay closer inshore.

“The further we go, the more we pay for fuel without guarantees about the catch,” Nahal says, leading a line of five boats, the air heavy with the stench of diesel and sardines.

For Gaza, fenced in by Israel and Egypt, and where Hamas Islamists took power in 2007, the open sea seems to offer the promise of freedom – but it is deceptive.

Israel’s navy fully controls the waters off Gaza’s 40km long coastline, and regularly restricts or expands the size of the fishing zone in response to security conditions.

After months of relative calm following an 11-day conflict between Israel and Hamas in May, the permitted fishing zone was expanded last month to 15 nautical miles, its maximum under the blockade, including deep water with richer fish stocks.

But Nahal’s crew does not venture that far. Six miles is their outer limit, good for sardines, but too close to shore for the bigger value fish such as tuna.

“We fishermen do not have appropriate engines to reach a distance of 15 miles,” Nahal says. “Currently, we are not allowed to enter Gaza with these modern engines.”

Some Palestinian fishermen are also fearful of heading out too far to sea. In the past, Israeli gunboats have opened fire and damaged nets to enforce access restrictions.

Making a living requires resourcefulness, and Nahal has repurposed a Volvo car engine to power the boat and run the powerful lights – which the fishermen shine into the night waters to attract the sardines.

Due to the blockade’s import restrictions, Israel also limits access to other key equipment such as sonar devices to find fish shoals.

Israel restricts such items citing their ‘dual use’, saying they could either aid Hamas weapons production, or the powerful engines could be used by smugglers.

It says the blockade is necessary to protect Israeli civilians who have been targeted with thousands of rockets fired by militants in the enclave since the Hamas takeover.

But Yussef (22) keeping watch on Nahal’s boat, complains that with all Gaza’s fishermen forced into the same small area, they struggle to catch enough to turn a profit.

“There’s not enough fish,” he says. “I’ve lived off of fishing since I was 14. Every day, when the water is open, I go out. It’s the only thing I know how to do in life.”

For Gaza, home to some two million Palestinians – roughly half of whom are unemployed – fish from the sea offer a critical source of protein.

But as well as overfishing, the industry faces multiple challenges.

They include poorly treated sewage pumped into the sea from the tightly packed city, “affecting the entire marine environment and public health”, according to a 2020 World Bank report.

“Many of the fish that people depend on are already overexploited,” the World Bank adds.

This time, for Nahal, there is moderate success.

After hours shining bright lights into the waters, the boats encircle the area and cast their nets.

“Here are the fish, catch them, for it is my fish that I love,” the men sing as the catch is hauled up.

Exhausted and back in port, the fishermen sell the catch in the busy port, where auctioneers shout prices to waiting wholesalers.

It is more than he had hoped for, but is barely a profitable night once his costs and crew’s wages are deducted.