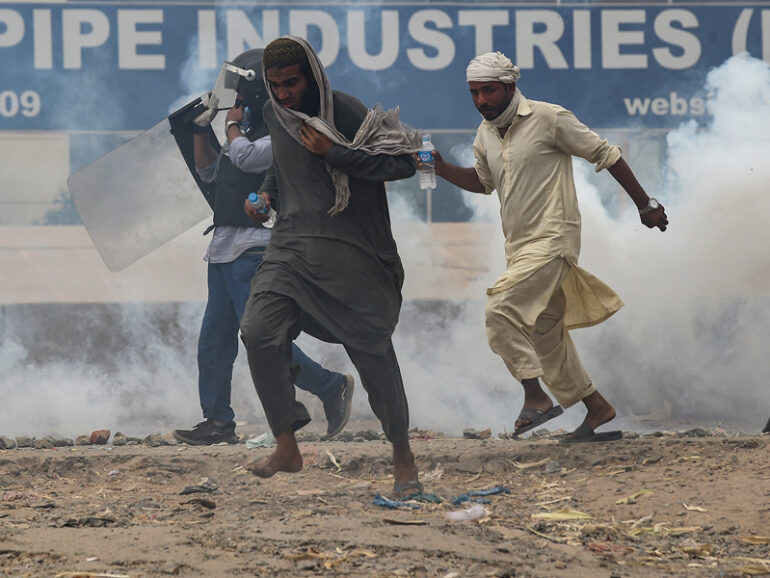 Lahore, Pakistan – A radical party of Pakistan on Saturday said seven of its supporters have died in clashes with authorities in Pakistan’s eastern city of Lahore after two police officers were killed in the unrest.

The number of Tehreek-e-Labbaik Pakistan (TLP) protesters swelled by thousands on Saturday evening as supporters of the hardline party began marching towards the capital Islamabad without facing any further resistance from police.

Scores of the group’s supporters had gathered after Friday prayers to demand the release of their detained leader, blocking roads and firing projectiles in deadly clashes with police.

The TLP has previously been behind major anti-France protests that earlier this year led to the embassy issuing a warning for all French citizens to leave the country.

“Death toll of Tehreek-e-Labbaik Pakistan supporters rose to seven after two more people succumbed to their injuries caused by police firing,” the party tweeted on Saturday.

It had earlier said two of the seven supporters died on Friday.

Police in Lahore would not comment on the claim, but on Friday night said two of its officers had died.

Rana Arif, a Lahore police spokesman told AFP earlier on Saturday that officials were carrying out “a defensive operation against the mob… We are only doing shelling to control the crowd.”

TLP leader Saad Rizvi was arrested in April when Pakistan’s government outlawed the party in response to violent anti-France protests.

Thousands of protesters appeared to be moving toward the capital in a convoy but exact numbers are hard to verify with Police and TLP figures varying wildly.

Police have closed off major roads in Islamabad and Lahore using shipping containers to block the march.

The party has vowed not to end the protests or enter talks with the government until their leader is released.

Interior Minister Sheikh Rashid Ahmad, who had been in Dubai to watch Pakistan compete in the T20 cricket World Cup, returned home on Prime Minister Imran Khan’s directive to monitor the situation.

Six police officers were killed in April when the TLP staged days of rallies that shut roads and paralysed Lahore, a sprawling metropolis of over 10mn people.