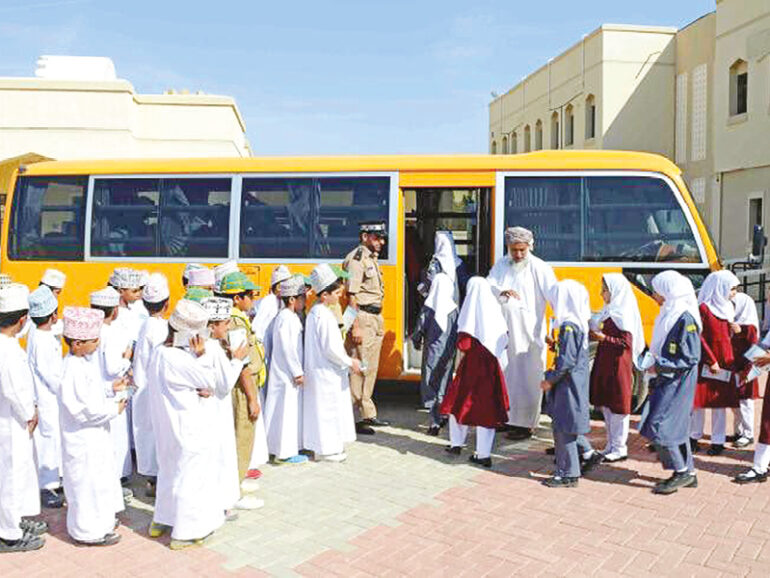 On Thursday, Royal Oman Police arrested the driver and supervisor of a school bus on charges of negligence after a child was forgotten in a school bus. The child needed hospitalisation following the incident.

The Ministry of Education took cognizance of the incident and issued a statement. ‘The ministry confirms that it is conducting an investigation and will initiate legal measures against those responsible for the accident. The ministry urges everyone to adhere to security measures for the safety of students.’

Many parents and citizens, who spoke to Muscat Daily, demanded stricter action against the bus driver for the negligence.

Nasser al Hosni, manager of Happy Line Transport, said, “This is not the first time a child has been left unattended in a school bus. Unfortunately, children have died in similar cases in the past. Negligence leads to such accidents.”

Hosni informed that introduction of modern technology on all school buses, especially private schools, will help prevent repetition of such cases. “Oman has many companies that provide such services.

Buses are fitted with sensors that prevent locking of the door until all the students have got off.”
Ahmed al Balushi, parent of a school student, suggested harsher punitive action on the bus driver and supervisor as deterrent for such negligence. “Additionally, parents and school officials must teach children the rules of security and safety inside buses.”

Noting the recurrence of these accidents that have claimed the lives of children in recent years, Ali al Shayadi, a teacher, said, “The tragedy is not only the death of the student, but the psychological impact on the parents of such victims. Increasing the penalty for negligence and providing measures of safety on buses are a couple of important steps needed to avoid repetition of such tragedies.”

Describing these incidents on school buses as ‘frequent’ lately, Khalid Ahmed Ali Tabook, head of the Ministry of Social Development’s Family Counselling and Guidance Department in Dhofar, said, “These incidents create great fear among children and their families.”

These incidents create a phobia of school or vehicles for some children. “It can affect them psychologically and complicate their life.”

Tabook added that parents may also lose confidence in school transportation as a result of the anxiety arising from these recurrences. “Safety guidelines for school buses must be adopted immediately. They must be obligated to install security and safety systems such as surveillance cameras and tracking devices. Additionally, a periodic health checkup of bus drivers is needed.”

Royal Oman Police called on school bus drivers to ensure no child is left behind in vehicles at the end of a trip to prevent similar tragedies.

In a statement following Thursday’s incident, Children First Association said, ‘We are following up on the child’s condition in hospital and wish her a speedy recovery. The association also expresses its deep concern about the recurrence of such incidents despite the availability of guidance programmes. The association urges the concerned authorities to find a permanent solution to prevent recurrence of these painful incidents.’