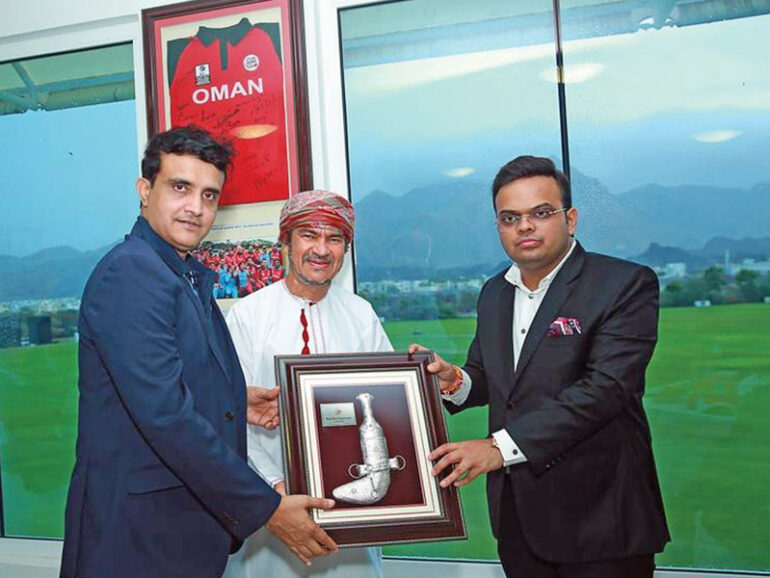 Muscat – Hours after the disappointment of hosts Oman bowing out of the ICC Men’s T20 World Cup 2021 on Thursday night, there were still a handful of volunteers eager to get a snap or a selfie with the man who made it possible for Oman to host the First Round Group A matches – Oman Cricket chairman Pankaj Khimji.

Oman lost to Scotland by eight wickets in their final league match to end third in the four-team group. Scotland with three out of three wins topped the group to advance along with Test-playing side Bangladesh, who finished second.

There was a tinge of sadness on the team’s failure to make
history by qualifying for the Super 12s but that was
overshadowed by the tremendous success of Pankaj Khimji and his organising team in hosting the World Cup.

Oman Cricket (OC) won allround praise from the ICC, BCCI, players and officials along with the fans and journalists from other countries who came to cover the six group matches
involving hosts, Bangladesh, Scotland and Papua New Guinea.

History was made on October 17 when Oman hosted the
inaugural ceremony of the T20 World Cup at the Oman Cricket Academy Ground as they became the first Associate
Nation to host and play in the ICC Men’s T20 World Cup.

Over the next five days since the launch ceremony, OC demonstrated its organisational capabilities in large measure to win the hearts of all.

In an exclusive chat with Muscat Daily after leading from the front to host the T20 World Cup for the first time in Oman, Khimji said, “Great relief!. A great sense of accomplishment in many ways for Oman Cricket. We as Team Oman have delivered the World Cup as near as flawless as possible.”

Khimji added, “We also wowed many people around the world. The Wow factor grew among the cricket fans across the world. Our venue and video clips of Oman that were telecast globally have left a lasting impression on their minds about the sultanate. It was not only cricket but the way we showcased Oman as a country that made me immensely proud.”

The OC boss said ‘the success of the First Round Group B T20 World Cup games has made Oman a destination for cricket, permanently.’

“We are now firm destination for cricket nations across the world. There wouldn’t be any more quiet moments here. Cricket will play a big role in the sultanate’s sports tourism as we continue develop the facilities further,” said Khimji.

Khimji said, “We could achieve all this due to sheer drive and conviction. The team we put together was amazing and such projects are delivered only due to a committed teamwork.”

Asked to measure the overall success of hosting the T20 World Cup, Khimji replied, “9.5 on a scale of ten.”

However, the OC chief admitted that there was still a lot to do at the venue- Oman Cricket Academy Ground – with more focus on public facilities.

“We just had 91 days to deliver. It was possible only due to the support and blessings of His Majesty Sultan Haitham bin Tarik and H H Sayyid Theyazin bin Haitham al Said, Minister of Culture, Sports and Youth.

“H H Sayyid Theyazin’s strong backing was our biggest asset and strength. He told me ‘let’s do it’ and that gave me the confidence to make it happen. I am proud that we could put Oman on the world cricket map prominently,” said Khimji.

On Oman’s failure to advance to from the First Round after their loss to Scotland, Khimji said, “Our team suffered from nerves. They lack maturity. Our players certainly do not have big-match temperament and it reflected.”