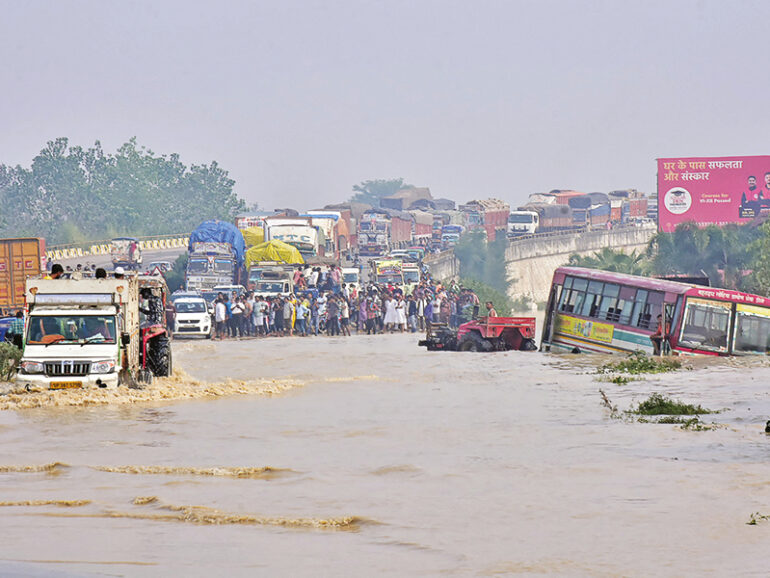 Dehradun, India – Floods and landslides in India and Nepal have killed over 100 as several families were reportedly swept away or crushed in their homes by avalanches of mud and rocks, said latest reports on Wednesday.

Experts say that they were victims of ever-more unpredictable and extreme weather across South Asia in recent years caused by climate change.

In Uttarakhand in northern India, officials said 46 people had died in recent days with 11 missing.

Five of the dead were from a single family whose house was buried by a massive landslide, local official Pradeep Jain told AFP.

Authorities ordered the closure of schools and banned all religious and tourist activities in the state.

Television footage and social media videos showed residents wading through knee-deep water near Nainital lake, a tourist hotspot, and the Ganges bursting its banks in Rishikesh.

The floods almost swept away an elephant near the Corbett Tiger Reserve — home to 164 of the big cats and 600 elephants — but in a video that went viral, the animal managed to battle the strong currents and swim to safety.

And the state’s Mukteshwar area reported 340.8mm rainfall in the 24 hours until Tuesday morning, the most since the weather station was set up there in 1897, the newspaper said.

The Indian Meteorological Department forecast a “significant reduction” in rainfall in the state from Wednesday.

In Nepal, 31 were reported dead after days of heavy rains caused floods across the country.

“It’s still raining in many places… The death toll could go up further,” she added.

In the eastern district of Dhankuta, a landslide buried a house overnight, killing six people including three children.

Landslides are a regular danger in the Himalayan region, but experts say they are becoming more common as rains become increasingly erratic and glaciers melt.

In February, a ferocious flash flood hurtled down a remote valley in Uttarakhand, killing around 200 people. At least 5,700 people perished there in 2013.

The state has reported over 7,750 extreme rainfall events and cloudbursts since 2015 – a majority of them in the last three years.

In Kerala state in southern India, the death toll reached 39 on Wednesday.

The coastal state has been battered by heavy rain since Friday and thousands have been moved to safer locations. More than 200 homes were destroyed and almost 1,400 damaged.

Kerala has also seen an increase in natural disasters, including in 2018 when nearly 500 people perished in the worst flooding in a century.

After a brief respite, forecasters are warning of more heavy rain in the coming days with alerts issued in several places in Kerala.

Those killed over the weekend included six members of the same family after a landslide buried their house.

Shutters on at least three dams across the state were opened Tuesday including Idukki, one of Asia’s biggest, though State Electricity Board chairman B Ashok said “there was no need to panic”.