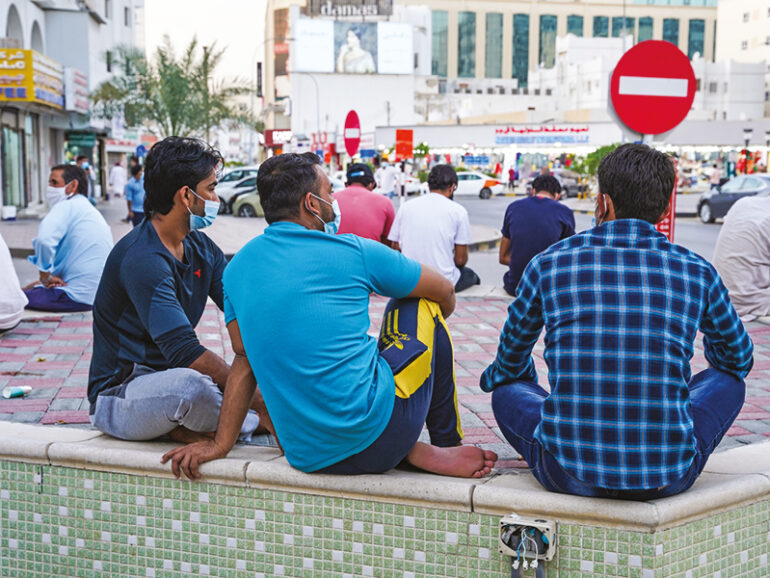 Muscat – The plight of some unskilled low-wage earning migrants from the Indian subcontinent, mostly employed for housekeeping by facility management companies, is heartbreaking.

These blue-collar workers come to Oman in the hope of a better life, but end up in debt instead.
N Islam paid close to RO1,000 for a job visa to come to Oman and work for a facilities management company. He gets paid RO100 a month and stays in company accommodation.

Married with two children – aged five and 12 – Islam takes care of his mother, too. From his salary of RO100, RO65 goes towards loan repayment for the job visa and RO30 to support his family back in Bangladesh. He manages his food and medical expenses by doing part-time jobs in his free time.

Islam considers himself fortunate that he doesn’t have to pay to renew his work visa, unlike his colleague S Alam.

They work in the same supermarket but on different company visas. Alam needs to pay for visa renewal and his resident card every two years. “My visa renewal is due in a couple of months and my company has asked me to pay RO372 for it.”

Alam took a loan from a relative for a visa to come to Oman. He gets paid RO100 and sends around RO70 home for his family and loan repayment.

“One of my relatives bought the visa from the foreman of the company I work for now,” Alam informed. He has two daughters, aged seven and 14, and his mother’s responsibilities also rest on his shoulders.

He is hopeful following the new labour regulation that allows workers to change jobs without employer no-objection certificate (NOC) at the end of the contract. “I am looking forward to finding a company that does not ask me to pay for visa renewal every two years,” Alam said.

A Abdul too bought a work visa in Bangladesh to work in Oman that cost him RO1,400 and his company used to charge him RO400 for visa renewal. However on his current visa, after working for the first five months for a company in Muscat, he was shifted to another location.

“My employer said there was some issue with the contracted company and did not pay me for those five months saying it did not pay the agreed amount.”

Abdul continued to work due to his financial commitments but matters worsened by the day. “They shifted me to another location where 20 people were living in one room. It was difficult to even sleep,” he said.

He left the job and had returned home to Bangladesh when he got a job offer from a restaurant. His new employer negotiated with the earlier company, but unfortunately, this was during the COVID-19 travel restrictions. He was able to return to Oman only after eight months.

Raheem, too, spent close to RO1,500 on a visa. He didn’t have to pay for its renewal, but when he returned from vacation at the end of his first two-year contract, he was sent to a work in a seafood processing company. Working long hours in the cold didn’t suit him and he fell ill. Since there was no medical insurance, he requested his employer to shift him to another company due to his health, but they refused. “They confiscated my resident card, threw me out of my job and cut RO410 from my salary dues.”

Raheem was promised a job by another company and asked to pay RO500 for the visa and RO30 for NOC from his ex-employer. “I paid RO200 in advance for the visa and RO10 for the NOC. After a couple of weeks of follow-up, the company said that my old sponsor had blocked my visa and that they cannot help. It’s been more that nine months, and they have not returned my RO210 nor helped me to get out of the problem.”

Islam has been in Oman for four years but still cannot dream of visiting his family back home or taking a holiday.

“I don’t save anything currently. Once my loan is cleared, I can think about a holiday. I can’t go home empty-handed.”

For Alam, it’s been six years since he saw his family last. “I may need a couple of more years before I can think about visiting home.”

Photo and text by Syed Fasiuddin