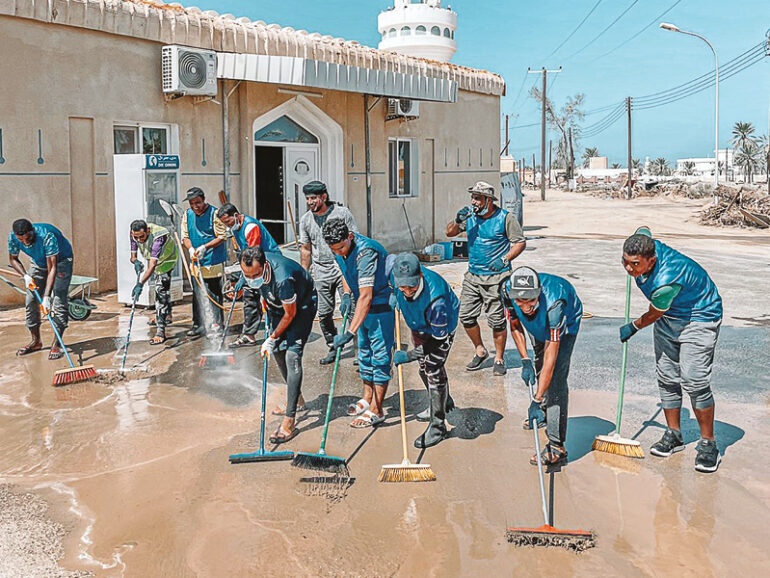 Muscat – More than 1,000 volunteers came together to help the Ministry of Awqaf and Religious Affairs clean and restore mosques that were damaged by cyclone Shaheen in the wilayats of Khabourah, Saham and Suwaiq in North Batinah.

According to Najeeb al Ruhaili, assistant director of the Awqaf Department in the governorate, floodwaters inundated and damaged many religious facilities.

“The ministry formed a team after the cyclone struck Batinah region. The team conducted a field survey and identified the mosques that were affected. The cyclone damaged over 250 mosques, some Quran memorisation schools and Eid prayer grounds,” Ruhaili informed.

“Some mosques were inundated with floodwaters and mud, others needed repair works of air conditioners, and still others had to have the prayer hall carpets changed. One mosque was completely washed away in the Sana’a Bani Ghafer area in Khabourah.”

Volunteers participated in the cleaning and repair works, helping refurbish and reopen 50 mosques for prayer so far. “The team responsible is taking care of maintaining health and hygiene standards in the mosques.”

The ministry has announced that it will build a mosque in Sana’a Bani Ghafer to replace the one that was washed away at a site in a valley far from the flow of wadi waters.

“We thank all the volunteers who participated and made great efforts to restore the affected mosques. We are working to reopen all mosques as soon as possible,” Ruhaili said.