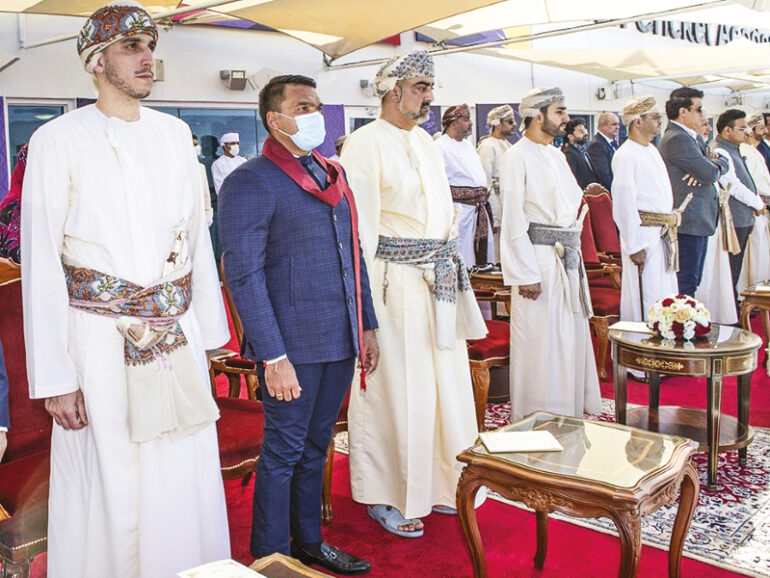 Muscat – “It is like living a dream. A dream start to our campaign and a dream realised of bringing the ultimate event in the shortest format of the game to Oman.”

These were the words of none other than Pankaj Khimji, chairman of Oman Cricket (OC), on a day when the sultanate made history by becoming the first ICC Associate member to host the ICC Men’s T20 World Cup on Sunday and also competing in the event.

Oman were off to a dream start as they steamrolled Papua New Guinea by ten wickets in the opening match of the tournament at the lush-green Oman Cricket Academy Ground in Amerat on Sunday.

Savouring the one-sided win, Khimji said “the dream of hosting a World Cup has been realised and what a dream victory to kick start our campaign at home”.

Earlier, the brief opening ceremony ahead of the First Round Group B match witnessed the attendance of H H Sayyid Theyazin bin Haitham al Said, Minister of Culture, Sports and Youth, Royal Family members, Board of Control for Cricket in India chairman Sourav Ganguly, International Cricket Council CEO Geoff Allardyce and other dignitaries.

Oman’s ten-wicket victory later in the opener was “an icing on the cake” and the OC chief said that “if Oman make it to Dubai for the Super 12 stage, it will be a vindication of the hard work of all who burnt the midnight oil to ensure that we host the World Cup”.

The top-two teams from each of the First Round groups advance to the Super 12 stage with Bangladesh and Scotland also eyeing the berth from Oman’s pool.
Khimji said, “I am overwhelmed by the presence of H H Sayyid Theyazin and other Royal Family members along with the who’s who of BCCI at the opening ceremony. We couldn’t have asked for anything more to launch the World Cup in Oman.

“The eyes of millions of viewers were on Oman today and it is testimony to the years of sweat and hardwork of the cricketing fraternity here. It was a dream of all our boys to make it a perfect night,” Khimji added.

“We are confident that this World Cup in Oman will contribute to building an enduring legacy for the game in the country, and I thank the ICC and the BCCI for their trust and cooperation and thank everyone who has contributed to the organisation of this event here.”