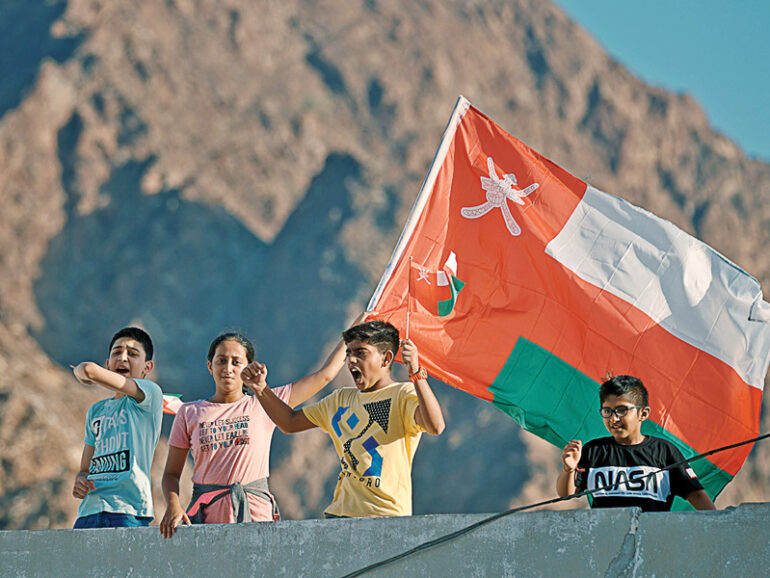 There has been a brisk sale of tickets for the six matches to be played at the venue in Al Amerat. Final touches are being given to the venue, which would be the cynosure of all eyes when the opening game between hosts Oman and Papua New Guinea begins on October 17 at 2pm.

A high-profile and star-studded guests’ list that includes the top brass of the World Cup hosts BCCI, ICC, and Oman sports are expected to grace the opening ceremony.
With an expected overall TV viewership of around 3.5bn worldwide for the T20 World Cup, which concludes in the UAE on November 14, the thrilling format of cricket is one of the biggest sports event held ever in Oman.

And to celebrate being the co-host of the T20 World Cup 2021 and leave a lasting legacy in the hearts of the fans across the world, Oman Cricket launched on Wednesday an anthem #HayyaCricket dedicated for the tournament in three languages – Arabic, Hindi and English.

To host and play in the T20 World Cup is an unique honour for an Associate nation like Oman and underlines the growing stature of Oman Cricket.
Welcoming the cricketing world to Oman and showcasing the pride in hosting, the exhilarating anthem spans the length and breadth of the nation.

The tune has already started reverberating through the sultanate and set an exciting tone for the event. Celebrating the multicultural milieu, the anthem is an echo of the emerging passion Omanis and expatriates living in the country hold for the sport and the pride they feel at cementing their position in the cricketing world.

It reflects the joyful welcome of the sultanate that is poised and ready to make its mark by hosting a global showpiece event that unites countries and transcends beliefs, borders and boundaries.
The #HayyaCricket anthem holds bundled emotions in a visually evocative 90 seconds that whips up an unrivalled frenzy across borders, generations, and languages and portrays an unaltered vision for Oman in the world of cricket.

A true homage to Oman, #HayyaCricket has been released in three languages of its people, an incantation that rouses hearts and the very spirit of the game.
OC chairman Pankaj Khimji said, “With the entire cricket-frenzy world watching, the T20 World Cup 2021 is the ideal moment to unveil a spanking new anthem. #HayyaCricket isn’t just any other anthem; it bridges social, cultural, and geographical divides – bringing together the multicultural community in the country for the love of cricket. We unite to chant #HayyaCricket for the biggest cricketing event happening in the history of Oman.

Developed by Mumbai-based Gozoop Group, the anthem translates the crux of moment and the belief that ‘Cricket not just a sport; it is a reason to celebrate and bring people together’.
Composed in India, the music is from London and Middle East. The instruments of Tajikistan and Syria with mesmerising vocals from Iran and Pakistan have blended together, accompanied by heartwarming moments shot entirely in Oman.

Ahmed Aftab Naqvi, CEO and co-founder of Gozoop Group, said, “#HayyaCricket is not just a campaign but an emotion that celebrates the sport and the spirit of the nation. It showcases the giant strides Oman has made in cricket along with the beauty, culture and hospitality of the nation. This will not just bring people to Oman but bring people in Oman closer to each other as they celebrate unforgettable moments with the beautiful lyrics and passionate beats of #HayyaCricket – the anthem for Oman Cricket!”

As the countdown begins for the first ball of the T20 World Cup 2021 in Oman, it is time to dance to the tunes of #HayyaCricket and not miss a beat as the world witnesses the largest cricketing event.

Duleep Mendis’ Oman beat Namibia by 30 runs ahead of Thursday’s final warm-up match against the Netherlands as they prepare for their opening ICC Men’s T20 World Cup clash against Papua New Guinea (PNG) in a First Round Group B game on October 17.

Batting first, Oman scored a challenging total of 152 for eight. In-form allrounder Aqib Ilyas, who had slammed a half-century in the second T20 game against Sri Lanka on Saturday, continued his good form with a 20-ball 30. Skipper Zeeshan Maqsood gave him good company with 28 while Sandeep Goud contributed 19.

Oman then restricted Namibia to 122 for nine with pacer Kaleemullah the wrecker-in-chief as he picked four for 23. Spinners Khawar Ali and Ilyas took two wickets apiece. Merwe Erasmus was Namibia’s top-scorer with 30.

After Thursday’s warm-up against the Dutch, Oman will return along with their fellow Group B teams – Bangladesh, Scotland and PNG – who are also in the UAE playing warm-up games.
All the four teams will be in a bio-secure bubble at Shangri La’s Barr al Jissah from October 15.

The T20 World Cup opener on Sunday begins at 2pm and will be followed by day’s second game between Bangladesh and Scotland at 6pm.