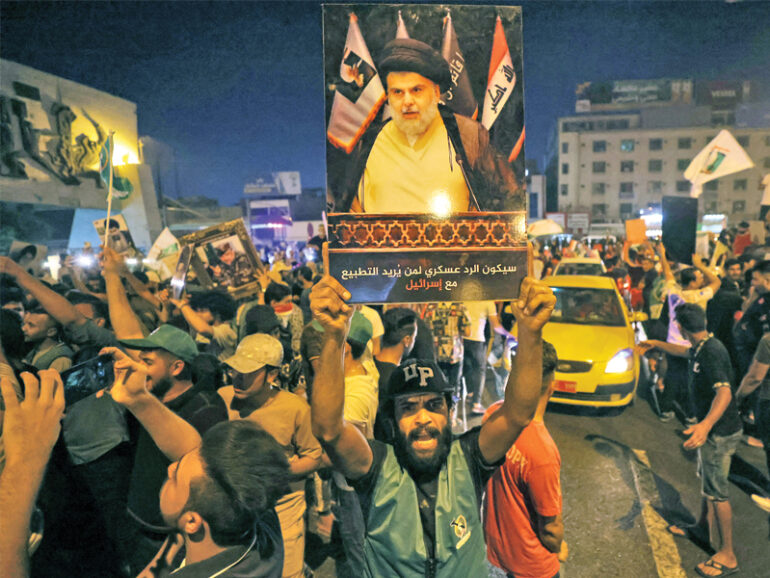 Sunday’s parliamentary election – the fifth in the war-scarred country since the 2003 US-led invasion toppled dictator Saddam Hussein – was marked by a record low turnout of 41 per cent.

Parties representing Iraq’s Shiite Muslim majority have dominated Iraqi politics since the aftermath of the invasion, but early results from Sunday’s vote deepened a rift between powerful factions within that camp.

According to preliminary results from the electoral commission, the biggest winner was the movement of Shiite cleric and political maverick Moqtada al Sadr, which increased its lead to 73 of the assembly’s 329 seats.

This boosts the leverage in choosing Iraq’s next prime minister and Cabinet for Sadr, a one-time leader of a militia that fought against US troops who has recently adopted a more nationalistic and anti-Iran rhetoric.

Losses were booked by pro-Iranian Shiite parties with links to the armed groups that make up the paramilitary network known as Hashed al-Shaabi, or Popular Mobilisation Forces.

The Fatah (Conquest) Alliance, previously the second largest bloc in parliament, suffered a sharp decline from 48 to only about a dozen seats, according to observers and results compiled by AFP.

“We will appeal against the results and we reject them,” said a joint statement by several of the Shiite parties, including the Fatah Alliance.

“We will take all available measures to prevent the manipulation of votes,” added the statement also signed by the party of former prime minister Haider al Abadi, who served from 2014 to 2018.

The head of the EU observer mission, Viola von Cramon, said the vote had been ‘calm and orderly’ and that ‘there was nothing technically wrong with the majority of polling stations observed’.

Results from some polling stations were still being counted, nearly 48 hours after voting ended.

One of Hashed’s most powerful factions, the Hezbollah Brigades, rejected the election as ‘the biggest scam and rip-off the Iraqi people have been subjected to in modern history’.