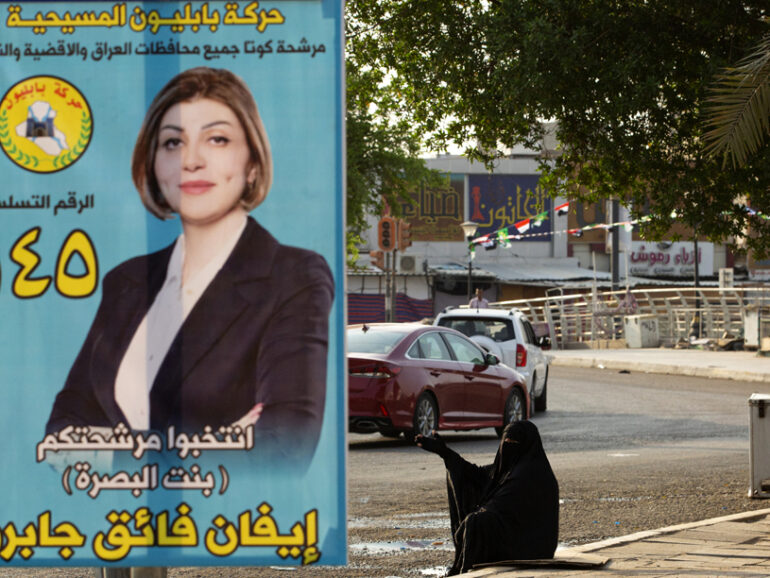 Baghdad, Iraq – Iraq goes to polls on Sunday as voters get a chance to exercise their franchise for individual candidates rather than parties for the first time under a new electoral law meant to appease a youth-led protest movement fed up with the country’s old-style politics.

In theory, the changes will strengthen local voices as candidates can now run at the district level and as independents, allowing new hopefuls such as tribal leaders, business people and civil society activists to join the race.

But the shadow of Iraq’s traditional political blocs, which are mostly defined by religious sect or ethnic group, still hovers over many of the candidates who claim to be non-aligned, raising questions about the impact of the reform.

On campaign posters, many of the more than 3,200 hopefuls seeking office declare themselves to be free of affiliations with the powerful blocs in parliament — but not everyone is convinced.

“The candidates want to distance themselves from the failures of their parties and try to adopt a new image, far from corruption and mismanagement,” said Shammari of the Baghdad-based Iraqi Centre for Political Thought.

Iraq is emerging from almost two decades of war and insurgency since the 2003 US-led invasion toppled dictator Saddam Hussein. Sunday’s parliamentary election is the fifth since then.

But there is little popular hope for major change through the ballot box, and widespread disillusionment persists over the political caste as most Iraqis worry more about a painful economic crisis.

Popular anger exploded in unprecedented street protests two years ago against youth joblessness, crumbling public services and a political class seen as more loyal to Iran or the US than to Iraqi citizens.

Hundreds died in months of protest-related violence, and more activists have been murdered, kidnapped or intimidated since, with no accountability for the deaths.

The protests prompted Prime Minister Mustafa al Kadhemi to move forward the ballot originally scheduled for 2022, and authorities to reform the election rules – but many of the activists and parties behind the uprising are boycotting the vote.

The new electoral law theoretically favours local candidates – which means tribal figures or local potentates – as the number of electoral districts has been increased to 83. Previously, under the list-based system, Iraq’s electorate was divided according to the 18 governorates.

Now, all across the country, many candidates are calling themselves ‘independents’, despite having had partisan affiliations in the past.

This is occurring across the political spectrum — from the movement of firebrand Shiite Muslim cleric Moqtada Sadr, to the coalition of secular former vice-president Iyad Allawi and to the State of Law Alliance of former prime minister Nuri al Maliki.

If elected, Maksousi does not rule out eventually siding with a bloc in parliament, where 329 seats are up for grabs.

“It’s possible, if there is a convergence of vision with a political tendency or deputies, and if that serves our electorate,” she said.

In Iraq, alliances tend to form and break up after each election and entire blocs can change sides.

The vote count and division of seats matter, but it is the horse-trading in the formation of parliamentary coalitions that is crucial to building a new government.

The favourite this time is the Sadrist movement, whose Saeroon bloc held 54 seats and was the largest in the outgoing parliament.

Sadr, with millions of devoted followers among Iraq’s Shiites and in command of paramilitary groups, has long been a crucial player in Iraqi politics.

Also powerful is the pro-Iran Shiite camp around the Hashed al-Shaabi. It held the second-biggest bloc, the Fatah alliance.

Pro-Iran parties “are likely to retain approximately the same portion of seats”, predicted Lahib Higel, an analyst for the International Crisis Group. “I don’t see that there is going to be a significant increase for them.”

But amid patronage rules and frequent fraud, experts don’t rule out the co-opting of independents by dangling the bait of ministerial posts and other enticements.

Shammari agreed that in Iraqi politics “the traditional forces and parties have sufficient leeway to attract independents”.