Gazans queue up to apply for Israeli work permits 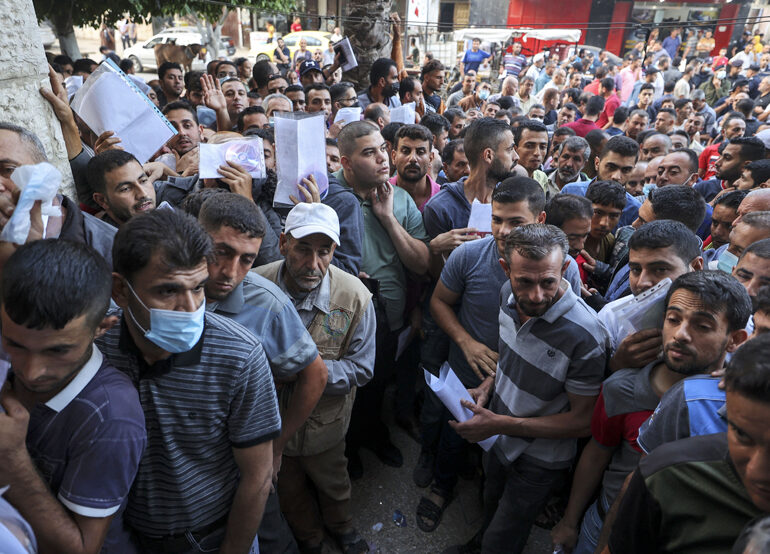 Gaza City, Palestinian Territories – Thousands of Gazans applied on Wednesday for work permits for Israel, which has been reopening its gates to labourers from the Palestinian enclave following the latest war in May.

In Jabalia, a refugee camp in northern Gaza, a crowd of men holding their identity papers lined up hoping to obtain a permit to work in Israel, AFP journalists said.

“There is no work in the Gaza Strip,” said Fathi Abu Nur, a 40-year-old unemployed man.

“Yesterday I heard that workers are registering to get permits (for Israel),” he said.

“I hope things will get better because the current situation is really difficult,” the father of five said.

The total number of permits being granted by Israel to Palestinian labourers in Gaza is 7,000, an Israeli security official told AFP, up from 5,000 workers and traders allowed in August.

In May, Israel and Hamas reached a truce following 11 days of the deadliest fighting in years.

Israel has since been easing restrictions on the Palestinian enclave, including reopening crossings, expanding the fishing zone and permitting the entry of certain goods.

Many Palestinians want to work in Israel, where wages are higher than in Gaza.

The impoverished territory of two million inhabitants with an unemployment rate of about 50 percent has been blockaded by Israel for nearly 15 years.

According to Shaaban, Gaza’s income would increase by three million dollars per day ($3 million), if Israel granted 20,000 work permits.

Meanwhile, the increase in permits was “the result of a political process, including discussions in Cairo between the Hamas movement and Egyptian officials”, a Palestinian official at the chamber of commerce said on condition of anonymity.

Israeli Foreign Minister Yair Lapid has put forth a plan to improve living conditions in Gaza in exchange for a Hamas commitment to “long-term quiet”.

Israel and Hamas have fought four wars since 2008.