Strays cling on to dear life during cyclone Shaheen 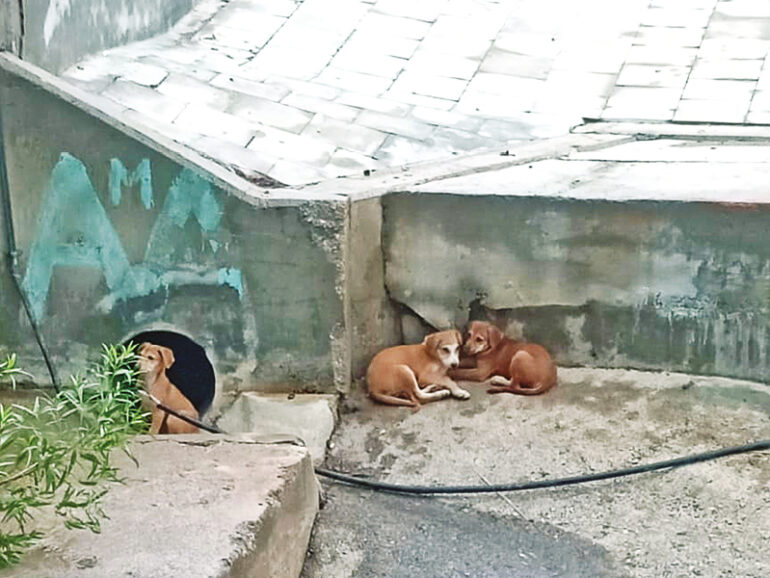 Muscat – As severe cyclonic storm Shaheen left parts of Oman shaken in its wake, authorities and people scrambled to help those affected. But there were still more living creatures that could do little other than huddle and hide in wadis and mountains.

Shaheen flooded out helpless dogs and cats from their dwellings in wadis.

Strays and abandoned pets are known to find shelter in the city’s wadis. Pedigree dogs of wealthy families, abandoned by their owners as they left the country in a haste, survive scorching heat and scarcely available food by adjusting to their new homes in wadis. But following Shaheen, many of these animals are now struggling to survive, as their wadis remained flooded.

The Wadi Kabir has colonies of dogs and cats. Most survive as food and water is available. However, during Shaheen the downpour flooded the wadi wreaking havoc for the animals with nowhere to escape. Their frantic cries to be rescued brought little help as roads were mostly empty with people choosing to stay safe indoors. Few lucky ones were rescued by passers-by.

Elizabeth Ipe is one such animal lover who rescued a litter of pups. “The cyclone on Sunday played havoc with strays in many areas of the city. We woke up early to the sound of our pet cat Ginger meowing, the wind whistling and puppies whining. The cry of the pups came from the bridge over the Wadi Ruwi.”

Elizabeth ventured out despite the heavy rains and strong winds, barely able to walk. She saw four little puppies desperately trying to clamber out of the fast flowing wadi. “Each time they tried, they slipped back down the embankment. The mother was running up and down encouraging her puppies to jump out but the pups could not climb over the wall.

“We placed planks of wood against the embankment hoping they would be able to climb out. After several failed attempts, the pups finally go out one by one as the water level receded a bit. I hope the pups are safe now.”

Strays tend to be independent and seek human help only in extreme situations. Many trapped animals were seen patiently waiting for the water level to recede before they moved to safe and dry ground, sheltering in parking lots, building porticos and residential buildings.

Abdul Rahman, a Bangladeshi national working in Amerat, shared a similar story. “In the afternoon, when the rain reduced to a drizzle, I heard feeble cries of a cat. With my friend, I ventured out and not very far away in the wadi near by we saw a cat on a rock struggling not to be swept away in the flowing wadi waters.”

It was wet and weak after hours of struggle, yet it tenaciously clung on to the rock. Rahman walked through knee-high rushing waters to rescue the cat.
“It sensed that I was trying to help it and was calm when I picked it up from the rock and carried it to the embankment.”