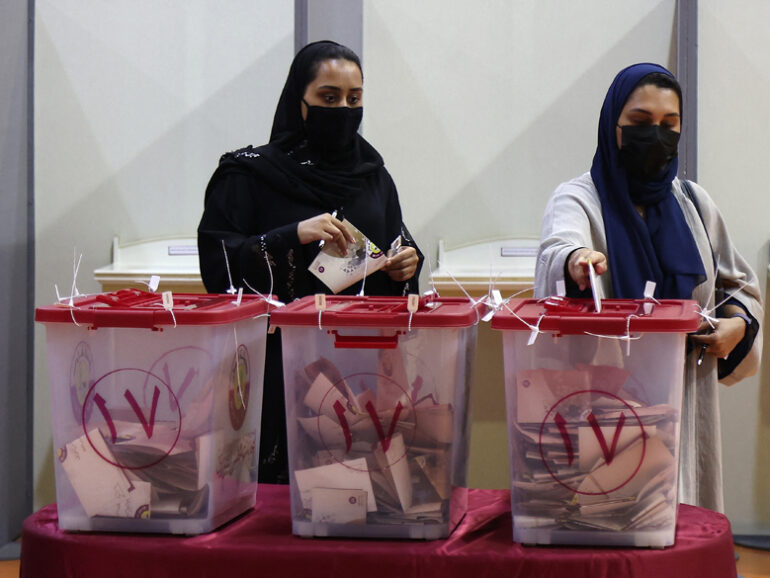 Doha, Qatar – Qatar voted in the emirate’s first legislative election on Saturday, a symbolic nod to democracy that analysts say will not lead to power shifting away from the ruling family.

The vote is for 30 members of the 45-strong Shura Council, a body with limited powers that was previously appointed by the emir as an advisory chamber.

Polls close at 1500 GMT and results are expected the same day. Voting began at 0500 GMT.

More than one-third of the entire field, 101 candidates, had dropped out of the race by Saturday afternoon according to state-run Qatar TV, apparently to support other candidates in their constituencies.

After the withdrawals, there were 183 candidates in contention for the 30 seats. The remaining 15 will be appointed by the emir.

In the 17th district, a chauffeur-driven Mercedes-Benz and a pearl white Rolls Royce SUV dropped off female voters at a primary school. Women were a majority among the steady stream of those casting ballots there at lunchtime.

Observers say the repeatedly-delayed decision to hold the election comes with Qatar under heightened scrutiny as it prepares to host the 2022 World Cup.

Former US ambassador to Qatar Susan Ziadeh said Qatar was “looking to see how it enhances its position on the world stage” which had led it to organise the polls ahead of 2022.

“They have the World Cup. That will place them on the international stage once again,” she said.

The Shura will be allowed to propose legislation, approve the budget and recall ministers. But the emir, all-powerful in the world’s largest exporter of liquefied natural gas, will wield a veto.

“I’m not going to vote because I don’t think the elections are well organised,” said one young Qatari who declined to be named because of the sensitivity of the election.

“I think sadly it’s done for the optics rather than a genuine desire for a more transparent and fairer process.”

In the working class Najma suburb, candidates and voters paused for afternoon prayers on mats that had been set up inside the 10th district polling station which, like all others, was segregated by gender.

Beyond single-candidate town hall meetings, posters and ads, the country’s electoral exercise has been limited, with no change of government possible and political parties outlawed.

Candidates have uniformly avoided debate about Qatar’s foreign policy or status as a monarchy, instead focussing on social issues.

All candidates had to be approved by the powerful interior ministry and just one in 10 of the originally confirmed candidates were women.

Most of Qatar’s 2.5mn residents are foreigners, ineligible to vote.

Candidates have to stand in electoral divisions linked to where their family or tribe was based in the 1930s, using data compiled by the then-British authorities.

In Al-Khor, a fishing town north of Doha, voters flocked to the polls in one district which has 13 candidates – making it one of the most competitive races in the country.

“There are a large number of candidates… but for me the most important thing in the selection is competence,” said voter Rashid Abdul Latif al Mohannadi, 37.

A member of the election organising committee told AFP they expected turnout in the polling stations under their supervision “will be large”.

Diplomatic sources suggest families and tribes have already conducted internal ballots to determine who will be elected for their constituencies, which analysts say is a consequence of not having political parties.

“Voting must be for the right person… and not by the degree of kinship or family name.”

Qataris number about 333,000, but only descendants of those who were citizens in 1930 are eligible to vote and stand, disqualifying members of families naturalised since then.

Some members of the sizeable Al-Murrah tribe are among those excluded from the electoral process, sparking a fierce debate online and isolated protests.