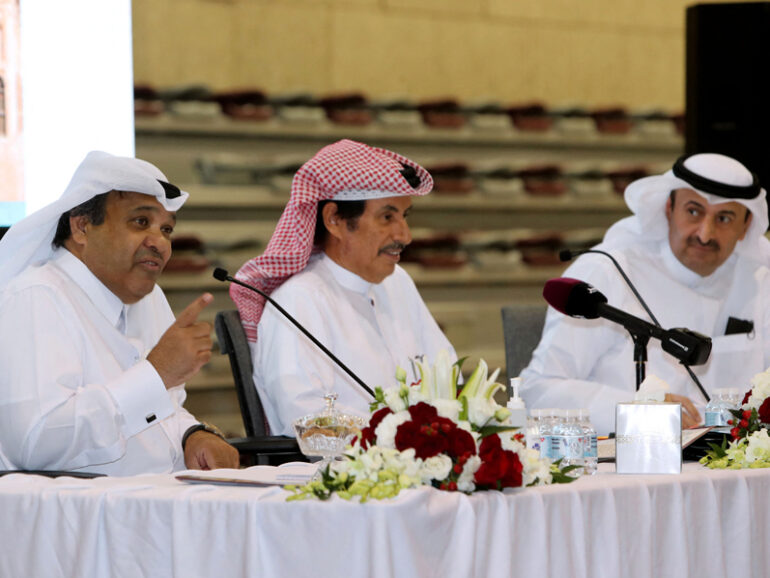 Al Wakrah, Qatar – Qatar is preparing for the maiden elections for its Shura Council to be held on October 2.

As the country enters into the campaign phase, a modest crowd gathers to listen respectfully TV actor Saeed al Burshaid, who gives his first stump speech ahead of Qatar’s inaugural legislative polls.

Burshaid gesticulates passionately as he builds to a crescendo in a nondescript and largely undecorated sports hall south of Doha, watched by a few dozen people sipping tea served by waiters.

“It’s our job to let them (voters) know, and to educate the people,” enthuses Burshaid, a minor celebrity in the Gulf who also previously ran Qatar TV’s drama department.

The October 2 election is for 30 members of the 45-strong Shura Council, a body with limited powers that was previously appointed by the emir as an advisory chamber.

While it is a rare nod to democracy in the autocratic region, observers say this is no turning point for Qatar, and point out that it comes with heightened scrutiny on the country ahead of next year’s World Cup.

Burshaid’s laminated manifesto pledges action on both workers’ and women’s rights, issues for which the 2022 World Cup hosts have been criticised.

But instead of calling for a new government or an overhaul of official policy, Burshaid cautiously praises the country’s Emir Sheikh Tamim bin Hamad al Thani and his 2030 development plan.

“The system – we want to make it more open, and also to discuss modern issues,” says Burshaid, who is wearing an immaculate white thobe and was ushered into the hall on a thick red carpet.

The Shura will be allowed to propose legislation, approve the budget and recall ministers. But the all-powerful emir will wield a veto.

After a pre-event break for prayers, the speech by Burshaid, a candidate for the 14th district, goes ahead uninterrupted, with neither of his two rivals present.

Campaigning in the Arabian desert nation has been subdued for much of the 14-day period allotted for drumming up support.

The candidates are mostly men, with just 28 women among the 284 hopefuls running for the 30 available council seats. The remaining 15 seats will be appointed by the emir.

Male voters at Burshaid’s segregated campaign event, who greet each other with customary kisses on the head, outnumber women five to one.

Analysts say the influence of the Shura is likely to be limited, and expect many voters to cast ballots for family members.

“I don’t think it portends great things for Qatar in terms of domestic legislation or reform,” said Michael Stephens, a senior fellow at the Foreign Policy Research Institute.

Diplomatic sources suggest families and tribes have already conducted internal ballots to determine who will be elected for their constituencies.

Candidates will have to stand in electoral divisions linked to where their family or tribe was based in the 1930s, using data compiled by the then-British authorities.

Voter Nasser al-Kuwari said he hoped people would not simply opt for those “closest to (their) family or friends”.

“I hope that we choose the right person in the right place,” he told AFP.

Georgetown University Qatar politics lecturer Danyel Reiche suggested the polls “are a step towards democracy that might not have happened without the upcoming World Cup” and its international spotlight.

The streets of Qatar’s towns have been speckled with billboards adorned with beaming candidates sporting Qataris’ ubiquitous national dress.

But beyond town hall meetings and posters, the country’s introduction to democracy has been limited, with no change of government possible and political parties outlawed.

“Now the government sees it’s time to have a democratic system… we are the second country in the Gulf after Kuwait. Now is the time for people to have their say,” said one voter in his 60s who declined to be named.
“We will go through a learning curve.”

Debate has also swirled in Qatar over the disenfranchisement of some members of the Al-Murrah tribe who make up as much as 60 percent of Qatari citizens.

The constitution states only descendants of Qataris present in the country in 1930 are eligible to run or vote, meaning some Al-Murrah are barred, their ancestors having been outside Qatar at that time.

“It remains to seen whether the elections become more inclusive by giving a vote to all Qatari citizens and whether the Shura Council will get more powers,” said Reiche.