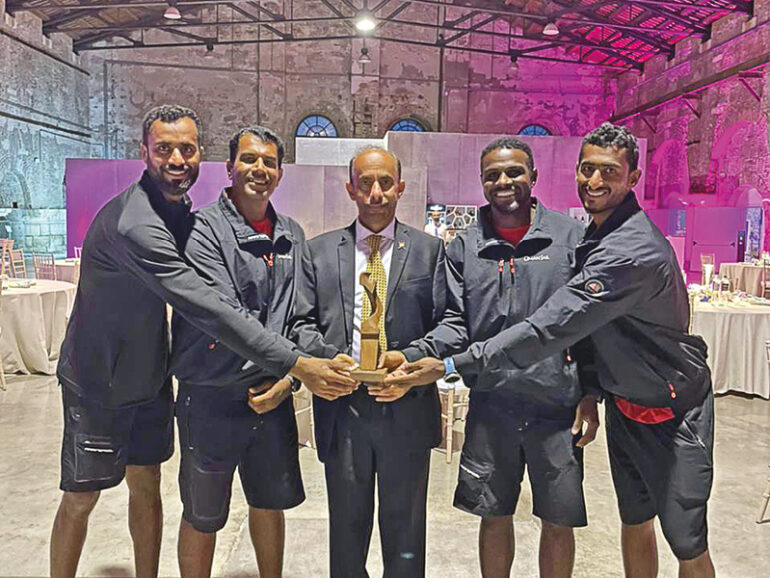 Muscat – It was a successful return to competitive sailing for Oman Sail sailors as they led Team Oman to a second-place finish in the 2021 Marina Militare Nastro Rosa Tour, which concluded in Venice in Italy on Sunday.

This was the first major participation for Oman Sail sailors after nearly a year and a half following the disruption caused by the COVID-19 pandemic.

Oman had, in fact, led at the half-way stage of the eight-leg series but slipped in the second half of the series, with Team France taking the top honours. Italy’s Team Luna Rosa was third.

The series took the sailors to eight destinations along the Italian coast with the opening leg in Genova from August 26-28. The tour then visited Rome, Gaeta, Napoli, Brindisi, Bari, Ravenna and concluded in Venice.

After podium finishes in all but one in 21 races in the first half of the series, Team Oman finished in second overall in fifth stage in Brindisi. The remaining races included two inshore races and a 50nm coastal race, which the team finishing third overall.

Venice hosted the finale and the team started well before succumbing to their second disqualification of the series in the last race on the penultimate day. They battled back on the final day but could not overtake the leaders.

Mashari said, “To finish second in our first event back after a long break is an impressive achievement. We did well to take a runner-up spot though we didn’t plan to compete in the full series. The results exceeded all our expectations. We bonded well and it will help us in our next challenge – Star Sailors League in Switzerland.”

Training for the Star Sailors League Finals began last week as team manager Hashim al Rashdi along with other sailors – Yassir al Rahbi, Waleed al Kindi, Musab al Hadi, Ahmed al Hasani, Abdulrahman al Mashari and Raad al Hadi – have already reached Switzerland. They will be joined by Mashari and his teammates as they prepare to compete in the Sir Roland Symonette Trophy.