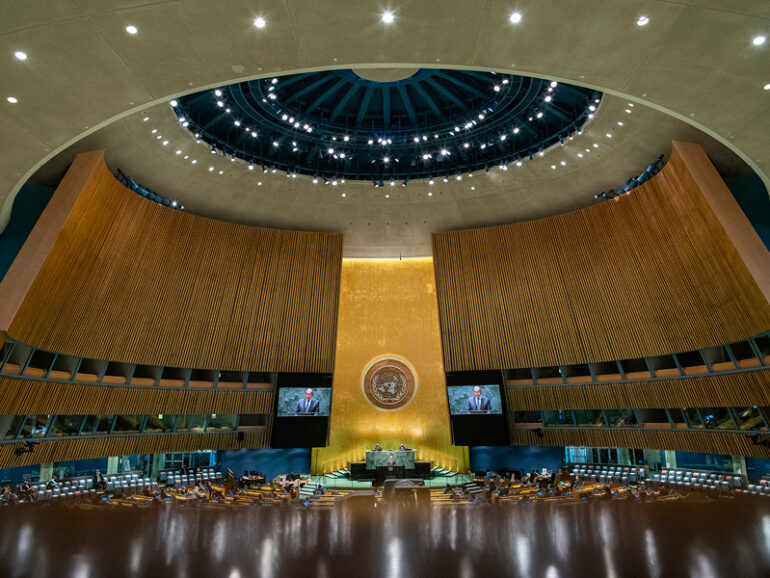 United Nations – Afghanistan envoy to the UN pulled out of delivering an address to the General Assembly Monday, as the diplomatic marathon that saw 100 leaders defy coronavirus fears to meet in person in New York drew to a close.

Ghulam Isaczai, who represented Afghanistan president Ashraf Ghani’s regime that was ousted last month, had been due to defy the Taliban with a speech but he removed his name from the list of speakers early Monday.

The annual high-level meet was also set to end without a speech on behalf of Myanmar, whose envoy has defied the military junta running the country to stay in his post.

But Guinea’s representative was expected to speak despite being appointed by the former president deposed in a military coup earlier this month.

The Taliban, who took over Afghanistan last month, wrote a letter to UN Secretary-General Antonio Guterres last Monday requesting that its new foreign minister Amir Khan Muttaqi be allowed to “participate” instead of Isaczai.

The group said that Isaczai, who had urged nations last month to “unequivocally state” that they would not recognize a Taliban government, “no longer represents” Afghanistan at the global body.

The UN still considers Isaczai the head of Afghanistan mission and he appeared on a list of speakers sent out by the UN late on Sunday.

“The country (Afghanistan) withdraws its participation in the general debate,” Monica Grayley, a spokeswoman for the assembly’s president, told AFP, adding that the mission had not cited a reason for the withdrawal.

Myanmar and Guinea were also causing intrigue going into the final day.

A high-level UN diplomat told AFP that “an agreement” had been reached between the United States, Russia and China preventing Myanmar’s UN ambassador – an outspoken supporter of the democracy movement – from speaking.

Kyaw Moe Tun, chosen by former leader Aung San Suu Kyi, is supported by the international community and has retained his seat at the United Nations following the February 1 military coup.

In May, the junta appointed a former general to replace him, but the United Nations has not yet approved the appointment.

Kyaw Moe Tun was the victim of a recent alleged conspiracy foiled by US investigators that plotted to either force him to resign or kill him if he refused.

He told AFP his plans for the General Assembly were “low profile.”

Diplomats are, however, expecting to hear from Guinea’s representative to the UN, Aly Diane, appointed by deposed president Alpha Conde.

It is another anomaly at this year’s high-level meet, which saw some 100 leaders descend on the UN headquarters after last year’s event was mostly virtual.

Many leaders chose to send video messages instead, however.

French President Emmanuel Macron initially said he would attend, before opting to send a video message that was to be played the day after US President Joe Biden spoke.
But now, Foreign Minister Jean-Yves Le Drian will speak Monday for France, whose presence all week was overshadowed by a spat with the United States over a mega submarine deal with Australia.

The address will be delivered via a pre-recorded video message, despite Le Drian being at the UN for five days this week.

“It is rare for one of the five permanent members of the Security Council to intervene on the last day. I’ve never seen it,” said a European diplomat, on condition of anonymity.

But despite the tensions and concern over growing lack of mutual trust among the international community, Shahid said this year’s General Assembly led him “to the conclusion that we all share the same concerns and wish the same outcome.”

Washington, fearing the event would be a hotbed for the coronavirus, had tried to dissuade leaders from traveling to New York, where a vaccine mandate is in place.

Strict rules over masks and social distancing were imposed, with only seven people per delegation allowed. However, US Secretary of State Antony Blinken was flanked by 20 people when he walked the corridors of the UN.

Ultimately, only four positive cases were reported, all in the delegation of Brazil, whose president Jair Bolsonaro is a vaccine skeptic, although his wife did receive a shot while in the Big Apple.

The restrictions meant that on the first day of the debate, only 1,929 people passed through the security gates at the UN, compared to 26,000 in 2019, according to the world body.

In all, by the end, more than 200 speeches will have been delivered, many focusing on international collaboration on climate change and COVID-19.