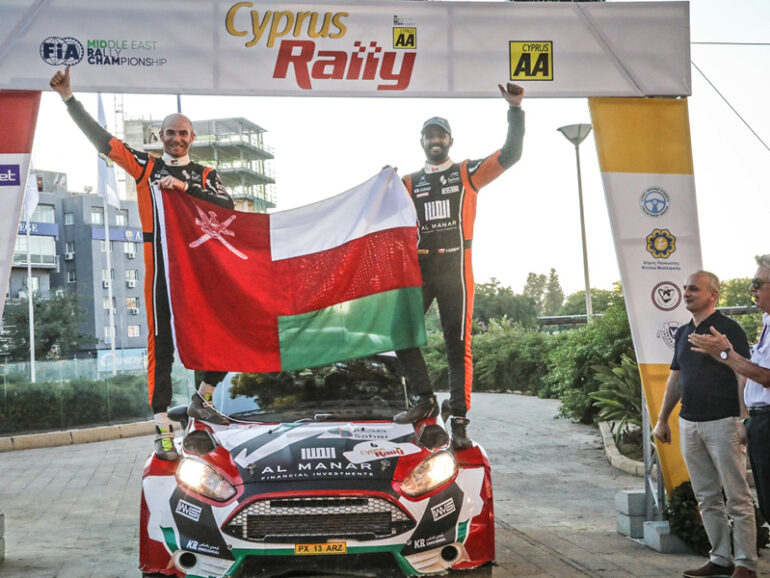 Muscat – A mechanical problem in his Ford Fiesta during the final special stage deprived Oman’s Abdullah al Rawahi and his co-driver Ata al Hmoud of Jordan an overall runner-up spot in the 2021 Cyprus Rally, the fourth round of the FIA-Middle East Rally Championship (MERC), in Nicosia on Sunday.

Despite the late trouble, Rawahi managed to grab a creditable third place. Cypriot pair of Alexandros Tsouloftas and his navigator Stellios Elia in their Volkswagen Polo GTi R5 won the top honours and were followed by another Cypriot duo of Petros Panteli and Pampos Laos in their Citroen DS3.

Tsouloftas was dominant in all the stages and benefitted from the pull out of two of the leading challengers – overnight leader Simos Galatariotis and his co-driver Antonis Ioannou and last year’s champions Nasser al Attiyah and his navigator Matthieu Baumel In fact, Rawahi and Hmoud were running second throughout the five stages and led Panteli-Laos by 10.1 seconds ahead of the final and 12th Super Special stage of 10.96km at Agia Marina. But a broken crankshaft in the final stage meant that the Omani-Jordanian duo had to ensure a finish in the final stage but were pushed to third spot among the 22 cars that finished the rally.

Speaking to Muscat Daily, Rawahi said, “I am happy with the third-place though we could have finished higher but for the last-stage crankshaft trouble.

“This is a very competitive rally and we had a large field with some of the top drivers from the region. My aim was to finish the rally. A podium finish is an icing on the cake. For me, it is important to gain experience and such challenging rallies help me in my quest to become a competitive rally driver.”

The Al Manar Financial Investments-backed driver said ‘it was a nice feeling to proudly hold the Oman flag on the podium’.

Oman’s other entry in the rally, veteran Hamed al Wahaibi and his co-driver Tony Sircombe of New Zealand, returned to action after retiring early on Saturday and competed the second leg under Rally2 regulations.

The veteran displayed his experience and skills in ample measure as he clocked top-three fastest times in four stages on Sunday to finish overall 16th.

And had it not been for a power steering issue on stage nine and a clogged radiator delay on the penultimate timed test on Sunday, he would have climbed back within sight of the top-ten.
The 51 year old’s return to competitive rallying after nearly ten years was impressive to say the least in his Skoda Fabia 1.6.

“It was a really enjoyable rally,” said Wahaibi. “I came here to get the experience and regain the knowledge. My notes were a bit off and we struggled with it a little but Tony [Sircombe] and I now understand more and more. The speed this weekend was so high. Congratulations also to Abdullah [al Rawahi] on his excellent result.”

The penultimate round of the 2021 FIA Middle East Rally Championship takes place in Kuwait on November 11-13.