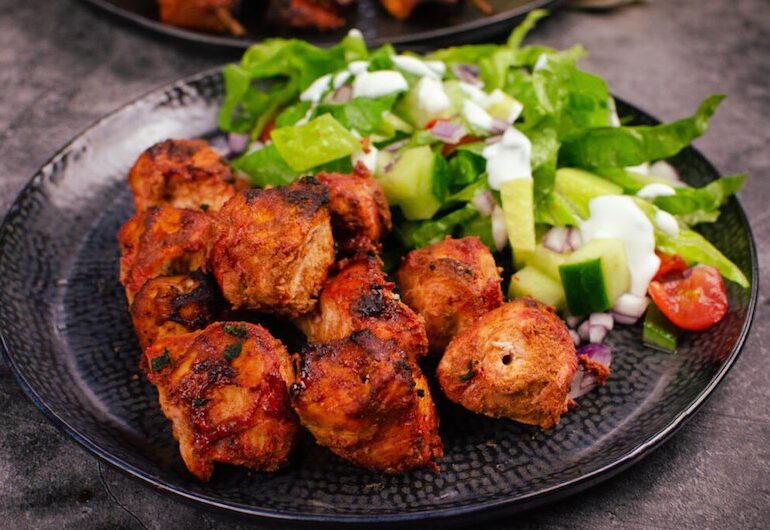 Tikka, a popular starter served at most Indian restaurants, is now available in varied forms and the tikka textures somewhat indicate the main ingredient.

Tikka invariably refers to chunks of seasoned boneless chicken, coated with a spicy yoghurt-based marinade, strung on bamboo or iron skewers and cooked in a tandoor (clay oven) or grilled over a charcoal furnace. However, with the introduction of other ingredients like fish, paneer (cottage cheese) and vegetables to this form of dry cooking, this appetiser is now specifically known as ‘Chicken Tikka’. The other forms like Fish Tikka and Paneer Tikka have brought in new textures to this popular north Indian dish which is consumed as a snack or a side-dish and served with green chutney, onion rings and lemon wedges.
While Chicken Tikka has it own inimitable aroma and magic to every bite, Fish Tikka (commonly made with kingfish, hamour or white fish) has a softer texture and a fishy odour. On the other hand, Paneer Tikka (the popular preference of vegetarians) has a more firm texture, and in this case, the marinade plays a key role in making it appealing to the taste buds as paneer doesn’t have a striking flavour or aroma.
The ingredients used for each of these tikkas are somewhat the same, but surprisingly, the main ingredient in each gives each of them their own identity and fan following. Try these three recipes on different days (together there will be a fight for supremacy):

Method
Cut the chicken breast into 3-4cm chunks and marinate with salt, ginger garlic paste, 1tsp Kashmiri red chilli powder and the juice of half a lime. Marinate for 30 minutes.
Now, make a second marinade. Hang curds in a cloth to get rid of some of the water. In a bowl, heat the mustard oil for 30 seconds in the micro and mix with the remaining Kashmiri chilli powder to bring out the red colour. Then add the hung curds and remaining spices, including the kasuri methi. Add the chicken into this marinade and let it sit for an hour.
Thread the chunks on skewers, spray with oil and cook in batches either on a grill or on a hot plate with a drizzle of oil. Don’t crowd the pan, even if there is much space as the chicken chunks will release more liquid and the toasting effect will be lost. (Ideally, chicken tikka should be done in a tandoor or over a charcoal furnace). Serve hot with onion rings and green chutney and note these tikka textures – the original.
…………………..

Method
Soak paneer cubes/sliced in hot water for 30 minutes, drain the water, squeeze the paneer and set aside. Chop capsicum, onion, and tomato into large chunks, large enough to be mounted onto skewers without tearing. Now, mix the ingredients for the marination and add the paneer, onion, capsicum, and tomato. Refrigerate for at least an hour. Then, mount them alternatively onto bamboo skewers and grill in an oven or over a charcoal furnace, turning sides in between, so that all sides cook evenly – 2-3 minutes each side. Remove when the corners get charred and the marinade coating on the paneer pieces dries up. Serve with skewers or onto a plate with green chutney and onion rings/lemon wedges. The tikka textures are quite different in the case of paneer – you can make it firm or quite soft.

Method
In a large bowl, whisk all the marinade ingredients (except oil), add the fish chunks and coat them well. Cover and refrigerate for at least an hour. Mount on skewers, drizzle with oil and cook over a charcoal furnace or on an oven grill at 180º C until tender and slightly charred at the corners. Serve hot with green chutney.