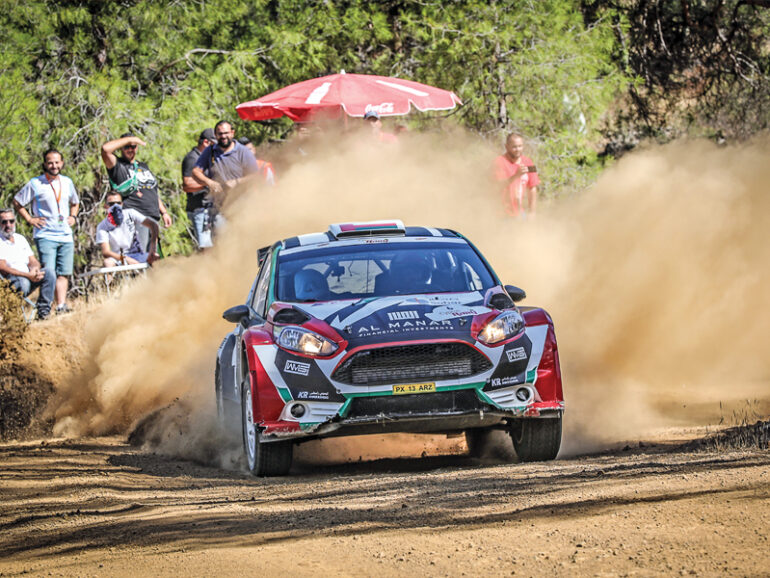 For Rawahi and his co-driver Ata al Hmoud of Jordan it was consistency that marked their display as they clocked top-seven times in all the five stages held on Saturday to be placed overall third after day one.

Stage six was cancelled later following an incident involving Qatar’s defending champion Nasser al Attiyah and Matthieu Baumel. Late reports confirmed that Attiyah went off the road and his car was consumed in flames leading to cancellation of the stage.

After the day one action, local driver Simos Galatariotis and his navigator Antonis Ioannou, who won all three of the Saturday morning special stages, lead the overall classification of the 49th Cyprus Rally.

In second place, 26 seconds behind, is another Cypriot pair – Alexandros Tsouloftas and Stelios Elias. Both the leaders are driving a Volkswagen Polo GTi.

Following the accident of Attiyah and Baumel in stage six, Rawahi and Hmoud in their Ford Fiesta moved up to third spot, having initially finished fourth overall in the MERC category.

Wahaibi made an impressive return to international competition after a decade, and along with New Zealand co-driver Tony Sircombe, set up fifth and fourth fastest times in the opening two stages.

However, they suffered an incident on the third stage and were forced to retire for the day. Fortunately they were safe and their Škoda Fabia 1.6 car didn’t take much damage. The pair is expected to restart for the final day action.

“Unfortunately we were not able to finish the stages on the first day,” said Wahaibi. “We slipped off the road entering a narrow corner. Tony and I are still learning with the new car and we will try and find out where the error occurred, maybe in the pace notes. We performed well before the accident. The car is in good condition and we can return for the last day.”

Rawahi, who recorded consistent top-six times, except in stage three when he was seventh, was happy with the first day’s action. The 24 year old, who is competing in Cyprus for the fourth time, said, “We managed to finish the first loop, that was our aim for the beginning. We can now do a little bit of adjustments. So far, so good, for a first day and hopefully we can finish the second loop in a good position.”

Earlier, the ceremonial start of the 49th Cyprus Rally was given on Friday evening in front of the Old Town Hall in Eleftheria Square. Teams will tackle three sinuous stages of 13.01km (Lythrodontas), 19.02km (Ayios Ephifanios) and 10.96km (Ayia Marina) on two occasions on Sunday.