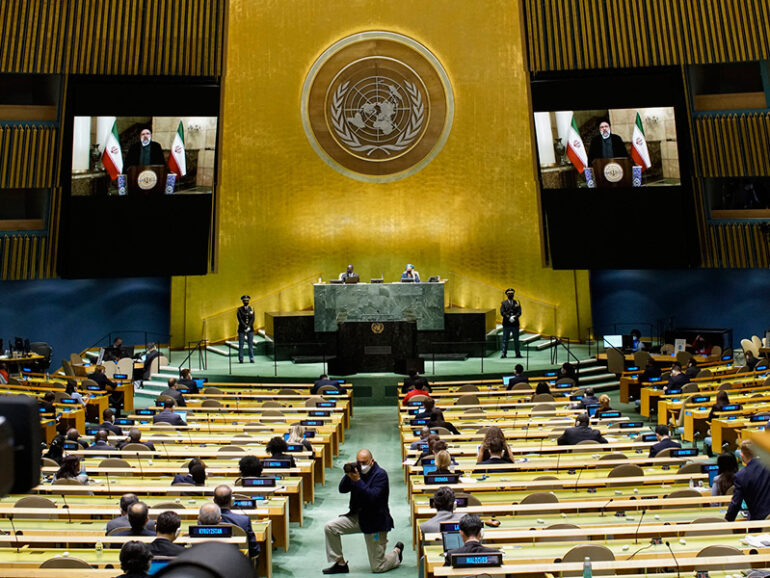 Tehran, Iran – Iran and the United States are expected to reach a compromise to resume talks on resurrecting the Iran nuclear deal, analysts say, despite sharp posturing at the UN General Assembly.

“The Vienna talks will surely restart and materialise because both sides have come to the conclusion that the current path cannot be continued,” Mehdi Rahmanian, editor of the reformist newspaper Shargh, told AFP.

He pointed to the lack of criticism from ultraconservatives of a deal Iran struck with the UN nuclear watchdog on September 12, in sharp contrast with any such announcement under Iran’s former moderate president Hassan Rouhani.

The deal gives inspectors of the International Atomic Energy Agency access to surveillance equipment and to service cameras at Iranian nuclear facilities.

At the UN General Assembly on Tuesday, Iran’s new ultraconservative President Ebrahim Raisi voiced support for reviving the nuclear deal even as he berated the United States.

His US counterpart Joe Biden, in his own address, renewed his willingness to return to the nuclear accord and lift sanctions, but maintained he would do everything to prevent Iran from acquiring nuclear weapons.

Only hours before Raisi’s speech, the Iranians said in New York that the nuclear talks should resume “in the coming weeks”, without giving a precise date.

This was confirmed on Wednesday, when the European Union’s foreign policy chief Josep Borrell said Iran’s Foreign Minister Hossein Amir-Abdollahian assured him that Tehran was ready to restart the talks “at an early date”.

Talks between Iran and the five other countries still party to the 2015 Iran nuclear deal – China, France, Germany, Russia and the UK – were launched in April aimed at bringing the US back into the agreement.

But the negotiations have been stalled since June, after Raisi won Iran’s presidential election.

“Regional developments, including the US withdrawal from Afghanistan, must also be taken into account,” Iranian analyst Saeed Laylaz said.

“From a geopolitical point of view, Iran and the United States now need a compromise,” he told AFP.

But each side wants to push the other to take the first step.

This was illustrated with two photos on the front page of Iran’s Shargh newspaper: one of Biden declaring “We are ready to return to the agreement if Tehran does,” and another of Raisi replying “We have no confidence in American promises.”

The nuclear deal gave Iran sanctions relief in return for tight controls on its nuclear programme, monitored by the UN watchdog.

But former US president Donald Trump unilaterally withdrew from the accord in 2018 and ramped up sanctions, prompting Iran to gradually abandon most of its nuclear commitments.

Biden has signalled a willingness to return to the accord, and in response Iran wants to show it is in no hurry to negotiate and is putting forward its own conditions.

“In recent months, after reducing our commitments in response to the US withdrawal, the West has insisted on our return to the Vienna talks, so that they can then return to the agreement. We refused their proposal,” Hossein Shariatmadari, editor of the ultraconservative Kayhan newspaper, told AFP.

Shariatmadari recalled that Iran’s president had stated the nuclear deal was not a priority, adding that the situation had turned in Iran’s favour and the US policy of “maximum pressure” had failed.

The analyst Laylaz said Iran’s supreme leader Ayatollah Ali Khamenei, who would have the last word, had “never opposed the negotiations”.