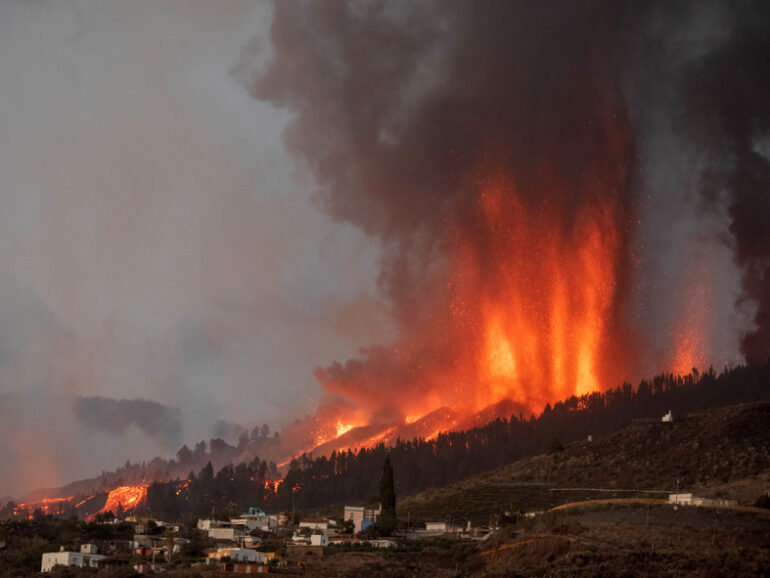 Los Llanos de Aridane, Spain – A volcano in Spain’s Canary Islands destroyed houses as it spewed out lava and ash, authorities said Monday, a day after it erupted, forcing some 5,000 people from their homes.

The Cumbre Vieja volcano sent huge plumes of thick black smoke into the sky after it erupted Sunday around 3:00 pm, churning up molten lava that oozed down the mountainside on the island of La Palma.

A regional government spokeswoman told AFP “a number of houses have been destroyed”, saying they were still surveying the area to determine how many properties had been engulfed.

Sergio Rodriguez, mayor of the nearby village of El Paso said at least 20 homes were completely destroyed by the volcano.

“The lava left absolutely nothing in its path”, Rodriguez told TVE broadcaster, saying residents were living in uncertainty.

They will “not be going home for a while, that’s for sure”, he added.
Spanish media said as many as 100 homes might have been affected.

Cumbre Vieja straddles a ridge in the south of La Palma island, home to around 80,000 people.

Experts had been keeping a close watch on the volcano after observing a recent upsurge in seismic activity and magma displacements.

An earthquake swarm under La Cumbre Vieja began a week ago and since then there had been thousands of tremors, the strongest with a magnitude of nearly four, the Involcan volcanology institute said.

PM at the scene

An earthquake swarm is a sequence of seismic events occurring in one place within a relatively short period of time.

On Tuesday, the authorities raised the alert level from green to yellow in certain areas around the volcano.

According to the local government’s projections, lava flows from the volcano, located in the centre of La Palma island, were likely to move southwest towards inhabited and wooded areas, before reaching the coast.

The lava flows were moving at about 700m per hour, and had a temperature of nearly 1,000 Celsius, according to the Canaries Islands Institute of Volcanology.

People had been asked to stay away from the area in the days leading up to the eruption in the areas surrounding the volcano, which are sparsely populated.

As of Sunday evening, flights to and from the island had not been disrupted, though some 200 members of the security services had been mobilised, including a helicopter as back up.

He arrived at the scene late Sunday evening to assess the situation.

“Given the situation (on) La Palma island, the head of government has delayed his scheduled departure today for New York,” to attend the UN General Assembly, a statement said earlier.

“All services are prepared to act in a coordinated fashion,” Sanchez wrote on Twitter.

The Canaries, an archipelago of seven islands off northwestern Africa, last recorded a volcanic eruption in 2011, undersea off El Hierro island.