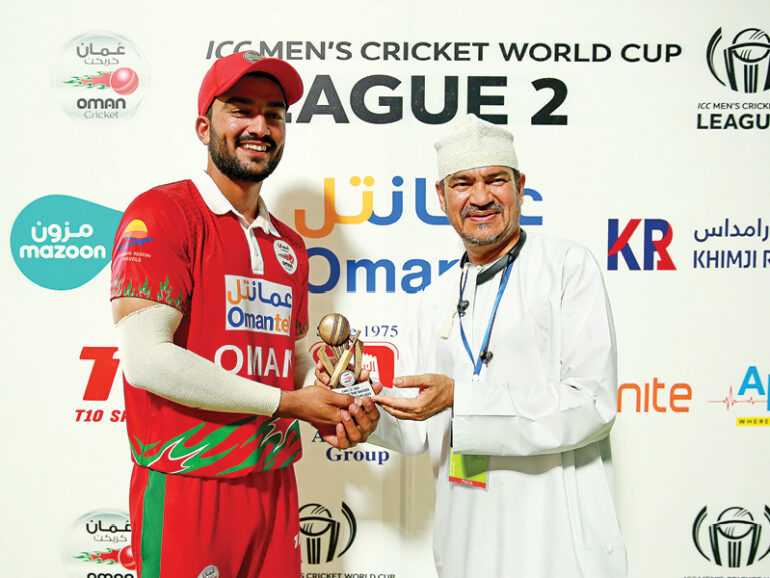 Muscat – Oman bounced back in style after Sunday’s loss to Nepal as they trounced the USA by 72 runs to conclude the first of the back-to-back ICC World Cricket League (WCL) 2 tri-series in style at the Oman Cricket Academy Ground on Monday.

With the win, Oman have recorded 11 victories out of the 14 matches played and remain on top of the WCL 2 standings with 22 points in the seven-team competition. The USA stay
second with 14 from 16 games and Nepal are fourth with eight from eight matches.

Oman coach Duleep Mendis will hope that his boys continue their winning momentum when the second tri-series begins on September 25. Scotland and Papua New Guinea will be the other teams in the fray. Both the teams will also be in Oman’s first round Group B along with Bangladesh in the ICC T20 World Cup, which begins in Muscat on October 17.

In reply, the USA were struggling early as they were down to 22 for two in eight overs. Only Monank Patel (56) and Gajanand Singh (48) put up some resistance as Oman bowlers – Ayaan and Khawar Ali – bagged four and three wickets each respectively. Bilal Khan, Maqsood and Kaleemullah took one wicket each. It was Khawar’s first match of the tri-series following his recovery from injury.

Oman’s show in the first WCL tri-series after the COVID-19 break, where they lost just one out of the four matches, will be heartening for Mendis as he gets his team ready for the T20 World Cup. They beat the USA in both the matches and won one and lost another to Nepal.