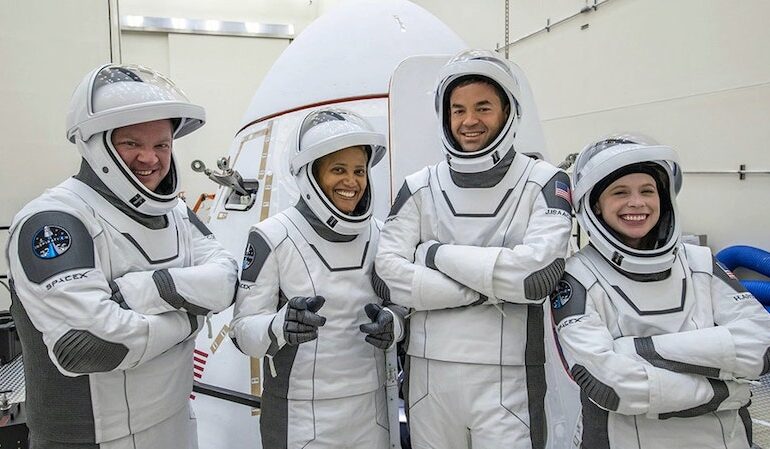 Four SpaceX tourists returned to Earth safely on Saturday after spending three days in space, successfully concluding the first orbital mission in history with no professional astronauts on board.
The SpaceX Dragon capsule, whose heat shield allowed it to withstand descent, was slowed down by four large parachutes before splashing into the Atlantic Ocean off the coast of Florida at 7:06 pm (2306 GMT), according to a video feed by the company.
“That was a heck of a ride for us, and we’re just getting started,” billionaire captain Jared Isaacman, who financed the trip with a goal of making space a bit more accessible, said shortly after landing.
A SpaceX boat immediately retrieved the capsule, before its hatch was opened and the space tourists, smiling broadly and waving their arms in the air, exited one by one. They were next headed for the Kennedy Space Center, where their mission had begun on Wednesday.
The stated goal of the mission, called Inspiration4, was to encourage the democratisation of space by proving that the cosmos are accessible to crews that have neither been handpicked nor in training for years.
“Congratulations @Inspiration4x!” SpaceX founder Elon Musk tweeted after the landing.
The four space novices – Isaacman and three other Americans – spent three days orbiting Earth, traveling farther than the International Space Station (ISS), at an orbit of about 575km high, and circling the globe more than 15 times each day.
Isaacman, who paid SpaceX tens of millions of dollars, offered the other three seats to strangers: Hayley Arceneaux – a 29-year-old nurse, Sian Proctor – a 51-year-old professor, and Chris Sembroski, 42 – a US Air Force veteran.
However, the exact price that the 38-year-old founder of Shift4 Payments and seasoned pilot shelled out for the mission has not been revealed.
The Inspiration4 crew bonded over the course of six months’ training, compared with years for professional astronauts taking up space travel.
During the flight, the members’ vital signs, including heart rate, sleep, blood oxygen levels and cognitive abilities, were monitored to study the effects of space on complete novices.
But they also enjoyed the view through a brand new observation dome fitted onto the capsule, spoke with actor Tom Cruise from the vessel, ate pizza, and listened to music.

“Welcome to the second space age,” mission director Todd Ericson said at a press conference after the landing. With its completion, “space travel becomes much more accessible to average men and women.”
There was only one minor issue during the flight with the capsule’s toilet system but a solution was quickly found, Ericson said, without giving further details.
“Best ride of my life!” Proctor tweeted after disembarking from the capsule.
The mission served as a huge fundraiser for St Jude’s Children’s Research Hospital, a leading facility in Tennessee. Arceneaux received treatment there as a child, and now works there.
The crew took with them various objects – including a ukulele, which Sembroski briefly played live from the vessel on Friday – that will now be auctioned off with proceeds going to the hospital.
The landing marked the third time that Musk’s company has taken humans to space and back, after the return of two NASA missions, one in August 2020 and another in May of this year – both bringing astronauts back from a stay at the ISS.
Unlike NASA astronauts, the members of the Inspiration4 mission did not go to the ISS but remained in orbit around the Earth.
The space adventure comes after a summer marked by the battle of the billionaires Richard Branson and Jeff Bezos to reach the final frontier. However their separate suborbital flights only offered a few minutes in zero gravity.
SpaceX is already planning further space tourism flights. In fact, “the amount of people who are approaching us through our sales and marketing portals have actually increased significantly,” said Benji Reed, SpaceX’s director of human spaceflight programs.
The next trip is scheduled for January 2022, with three businessmen on board.

Char with Tom Cruise from

The four space tourists, orbiting the Earth at 17,500 miles per hour (28,162 kph), talked to movie star Tom Cruise on Friday, providing a live update about life aboard the spacecraft.
Mission control said the crew members – Jared Isaacman, Sian Proctor, Hayley Arceneaux and Chris Sembroski – spoke with Cruise, who is hoping to make a film in space, from the vessel on Friday.
“Rook, Nova, Hanks, and Leo spoke to @TomCruise sharing their experience from space,” said the Twitter account of Inspiration4, the official name of the first ever space mission to take place without an actual astronaut. (The names are the call signs of the four passengers aboard SpaceX’s Dragon capsule.)
“Maverick, you can be our wingman anytime,” the tweet added, accompanied by a video clip of Cruise playing the elite fighter pilot whose call sign was Maverick in the movie “Top Gun.”
Last year, former NASA administrator Jim Bridenstine announced a film project starring Cruise to be shot in zero gravity on board the International Space Station. However, no details have yet been delivered about the project, which would be done in collaboration with SpaceX.
The four crew members also shared their experiences in space during a 10-minute live webcast with mission control on Friday.
Proctor, 51, who teaches geosciences at a college in Arizona and was a finalist to become a NASA astronaut, displayed a picture she drew with metallic markers of the Dragon capsule being propelled into space by a dragon.
Arceneaux, a 29-year-old physician assistant at St. Jude Children’s Research Hospital in Memphis, Tennessee, demonstrated her impressive spins in zero gravity.
“Hayley is a champ at spinning,” Proctor said. “She has been spinning from the moment we got on orbit.”
“It’s a lot of fun and allows us to lift very heavy things without any issue,” said Arceneaux. “We’ve also been taking several swabs of different parts of our body to evaluate the microbiome and how that changes in these three days in space.”
Sembroski, a 42-year-old US Air Force veteran, pulled out his ukelele and played a few chords.
The crew members also opened up the hatch in the nose of the capsule to show off the view from the cupola, a clear glass dome that allows for a 360 degree view outside.
AFP 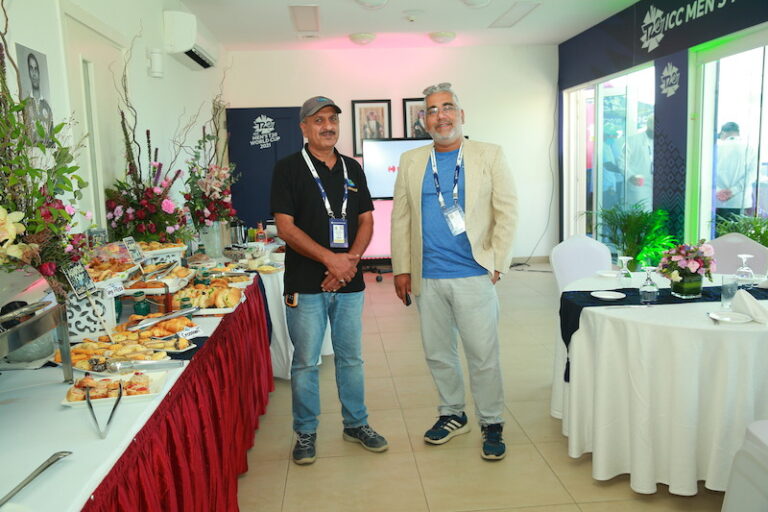 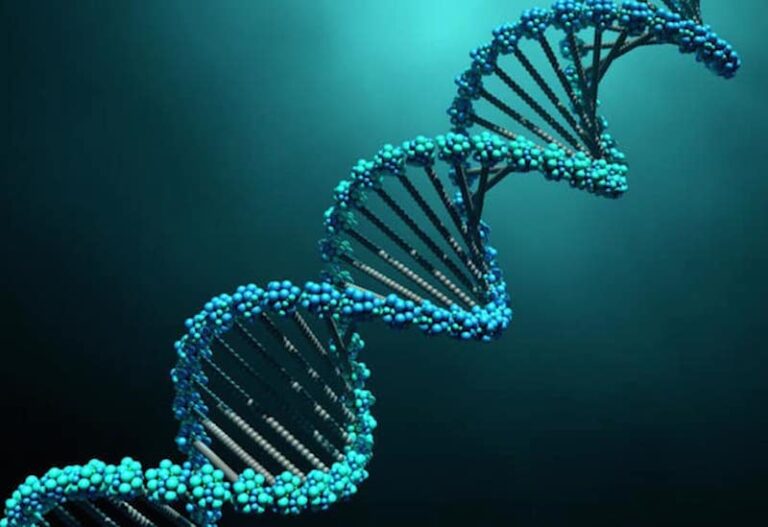 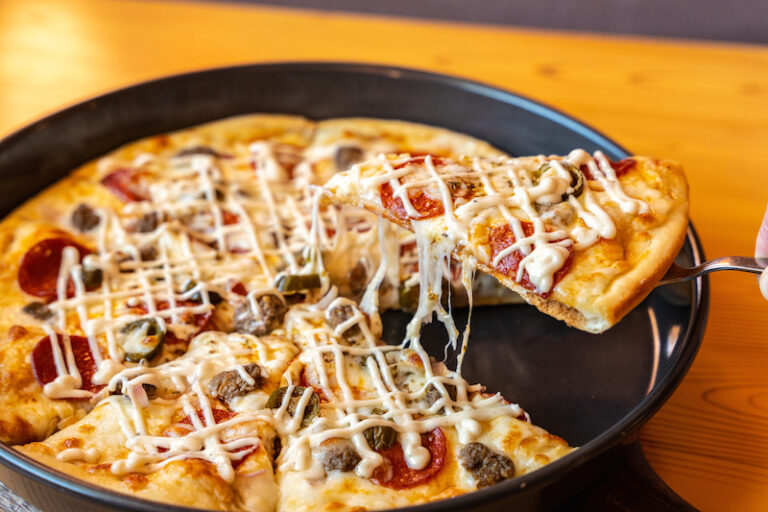