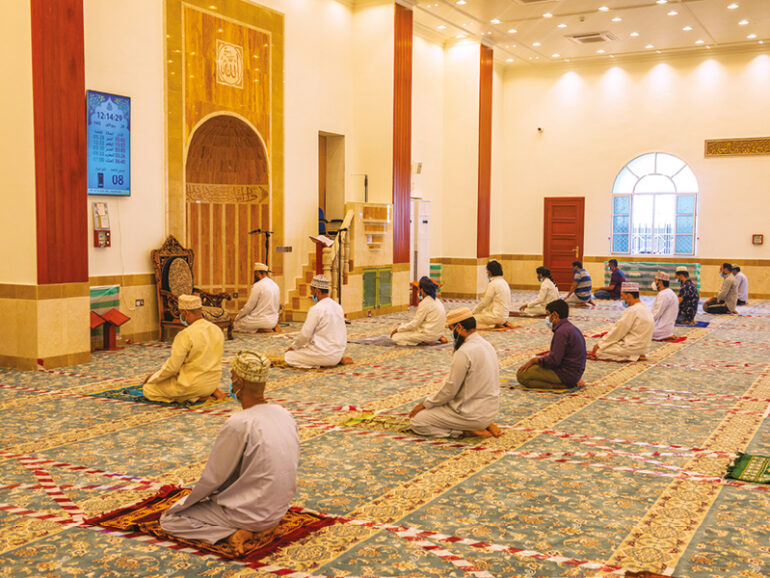 Muscat – After a hiatus of around 18 months, the Ministry of Awqaf and Religious Affairs (MARA) has allowed mosques to open their doors for Friday prayers – albeit after availing required permission for the same.

‘As per the approval of the Supreme Committee in charge of dealing with the effects of COVID-19 pandemic, mosques will be authorised to reopen for Friday prayers from September 24,’ the ministry said, adding that ‘prior to resumption, mosques will need to apply for permissions’.

The application for the permit has been asked to be submitted electronically through https://www.mara.gov.om/arabic/jmah_form.aspx from Sunday, the MARA said in a statement.

‘Mosques cannot open for Friday prayers without the permit and taking precautionary measures,’ the ministry said.

‘A team of volunteers will be formed to ensure that the worshipers have certificates of taking at least one dose of the vaccine till the end of September, while certificates showing administration of both the doses of the vaccine would be mandatory for entering the mosque from October’, it further said.

‘The mosques would be allowed at 50 per cent capacity, committing to social distancing. Worshipers must bring their own mats and must be wearing masks,’ the MARA statement said, adding that there would be direct communication with the authorities in the event of
violations.

Wait is finally over

Many people have been calling for the authorities to allow Friday prayers since all other activities have restarted.
The news of mosques reopening after more than one and half years has been received with excitement by the worshipers.
“Everyone is so excited after more than one year without Friday prayers. Conditions set like two doses of vaccines are ideal as most of the adults have already been vaccinated fully,” Shaikh Nasser al Jahdhami, an imam (prayer leader) at one the mosques in Azaiba said.

“In addition, we will be taking other precautionary measures as recommended, including the 50 per cent capacity condition set by the ministry,” the imam said.

Worshipers felt relieved, while gracefully acknowledging that ‘the wait is finally over’.

“As after many activities restarted and we have not seen any increase in number of cases, Friday prayers will not affect the numbers,” Amour al Tauqi, a retired government employee from Amerat, said.

“The same procedures that we take during the daily five prayers, must be followed on Fridays as well.

“In addition, only fully vaccinated people will be allowed and this will be an added preventive measure,” Tauqi said, delightfully adding, “We look forward to going back to the mosques on Fridays.”

Mosques in Oman reopened last year for the five daily prayers after they had been temporarily closed during the pandemic but didn’t have permission to host Friday prayers.

Shaikh Ibrahim Abdulaziz, imam of a mosque in Seeb, said, “I am so happy for the decision and at the same time we should adhere to the measures. I urge all people to abide by the decisions and regulations which are clear so that together we eliminate COVID-19.”
“At our mosques, we are fully prepared for that,” he added.