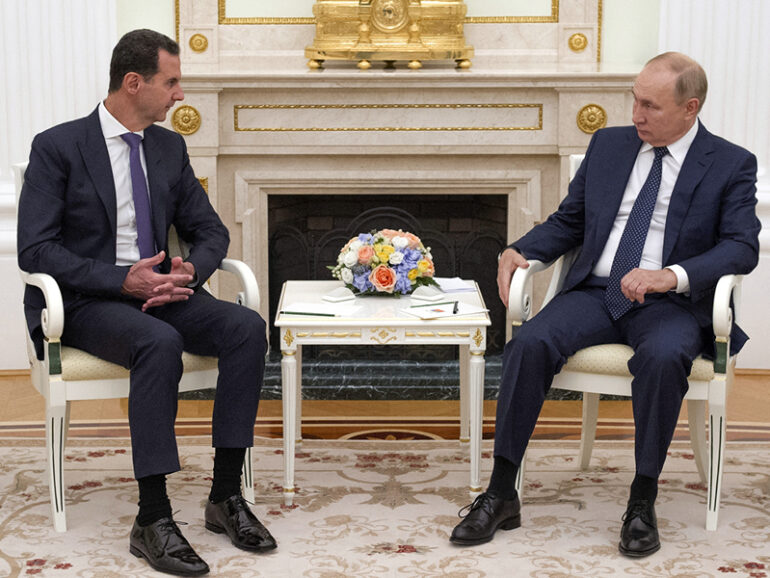 Moscow, Russia – Russian President Vladimir Putin condemned the presence of foreign troops in Syria without the approval of its leader Bashar Assad, during their unannounced meeting in Moscow, the Kremlin said on Tuesday.

Putin has been a key ally of the Assad regime throughout the Syrian conflict that erupted in 2011 with the repression of anti-government protests.

Russia’s military intervention in 2015 at Assad’s request helped turn the tide of the war in his favour and Moscow maintains key military bases in the country.

“The main problem, in my view, is that foreign armed forces remain in certain regions of the country without the approval of the United Nations and without your permission,” Putin told Assad during their meeting on Monday, according to a Kremlin statement.

Putin hailed Russia and Syria’s ‘joint efforts’ in the conflict, saying their militaries had returned the vast majority of Syrian territory to government control.

“Terrorists have suffered very serious significant damage, and the Syrian government, headed by you, controls 90 per cent of the country’s territory,” Putin told Assad, the Kremlin said.

Turkish troops and their Syrian proxies control swathes of land along Turkey’s southern border after seizing them from Syrian Kurdish fighters during the decade-old conflict.

Turkish soldiers have also been deployed at monitoring points around the last major rebel bastion of Idlib in the northwest of the country.

The US-led coalition is based in the northeast of the country, where it backs Kurdish fighters battling remnants of the Islamic State group.

Iranian advisors and Iran-backed groups, including the powerful Lebanese Shiite movement Hezbollah, are also present and have fought on the side of the Damascus regime.

The Syrian leader told Putin it was a ‘great honour’ to meet with him in Moscow and praised military cooperation and work on ‘the return of refugees who were forced to leave their homes and leave their homeland’.

In a statement, it said the two sides discussed the importance of reaching political agreements ‘between Syrians and without any foreign interference’.

Endless rounds of UN-backed peace talks have failed to end Syria’s war, and in recent years have been overshadowed by a parallel negotiations track supported by rebel backer Turkey and regime ally Russia.

Putin said he hoped Assad would continue ‘dialogue with your political opponents’.

“Only the consolidation of all forces in Syria will allow the country to get back on its feet,” he said.

The Syrian presidency added that Putin and Assad had discussed ‘economic cooperation’, while the Russian leader praised his country’s deliveries of coronavirus vaccines.

Russia’s political and military support for Syria, where it maintains key naval and air bases, has been a particular sticking point in Moscow’s relations with the West, which has imposed sanctions on Moscow for bolstering the Assad regime.