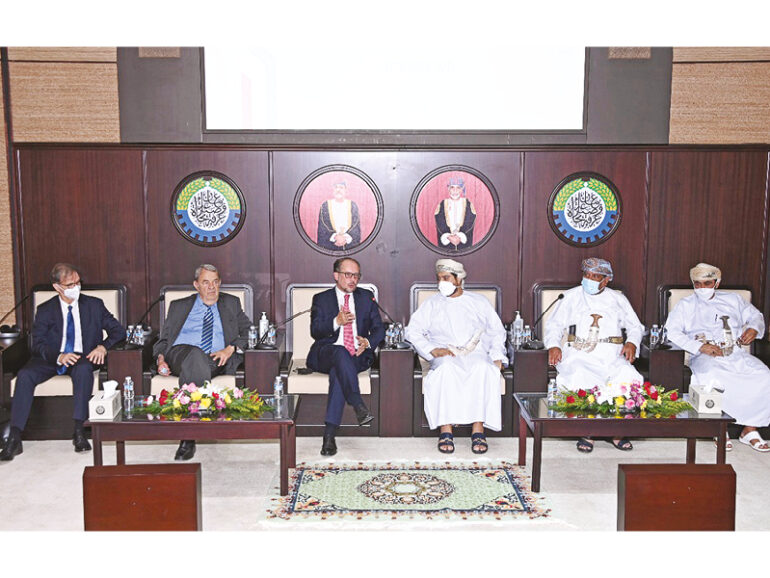 Muscat – Oman Chamber of Commerce and Industry (OCCI) organised a meeting with the visiting Austrian delegation on ways of upgrading economic cooperation and establishing joint investments on Monday evening.
Held at the premises of the OCCI, the meeting was part of the programme of the Austrian delegation that visited the sultanate under the leadership of Alexander Schallenberg, Federal Minister for European and International Affairs.

The meeting marked the start of partnerships that will benefit both sides, stated OCCI.

The meeting was attended by H E Qais Mohammed al Yousef, Minister of Commerce, Industry and Investment Promotion, the Austrian minister, Eng Redha Jumaa al Saleh, board chairman of OCCI, and members of the OCCI and the visiting delegation.

“The meeting discussed means of fostering bilateral cooperation and mechanisms of activating economic cooperation and investment. This visit constitutes a starting point for the establishment of fruitful partnerships benefiting both sides,” said Eng Redha.

He added that the OCCI is keen that this visit would yield new partnerships between businesses in the sultanate and their Austrian counterparts.

Statistics show that Oman’s imports from Austria stood at more than US$444,000 during 2019 while Omani exports to Austria in the same year crossed the US$3.5mn mark.

“Today’s meeting seeks to raise the rates of commercial exchange between the two countries, besides forging business partnerships in various economic spheres and concluding a set of cooperation agreements,” said Eng Redha.

Schallenberg said that such meetings help cementing cooperation and contributing to the creation of joint investment projects benefiting from readily available resources and incentives offered by both countries to the business community.

“We have the expertise and enablers to activate economic ties and raise the rates of commercial exchange,” Schallenberg said.

The presentation highlighted the attractive investment climate in the sultanate and the encouraging incentives offered to investors, including the freedom to transfer funds abroad, as much as 100 per cent ownership of business projects, transparency in laws and regulations and other privileges and advantages.