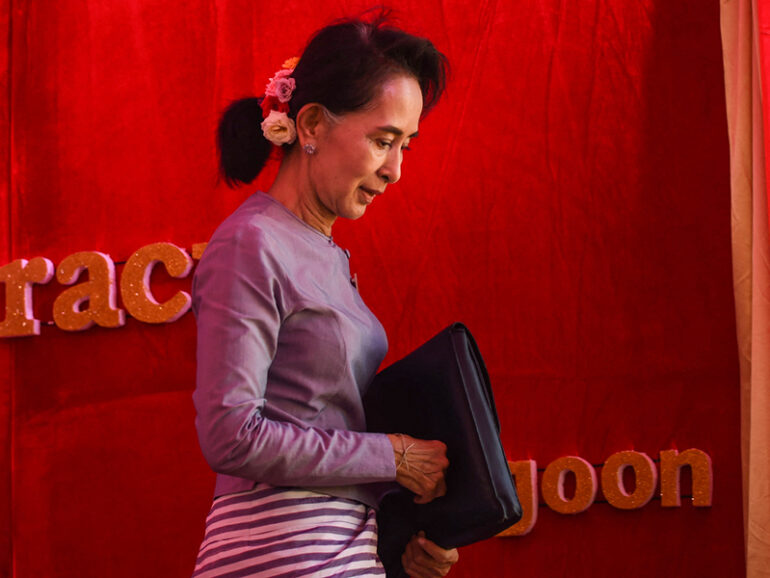 Yangon, Myanmar – Ousted Myanmar leader Aung San Suu Kyi skipped the resumption of her coronavirus-delayed trial in a junta court because she felt ill, her lawyer said on Monday.

Suu Kyi was deposed by the military in a February coup that sparked a mass uprising. The junta launched a brutal crackdown to suppress opposition, and its forces have killed more than 1,000 civilians since, according to a local monitoring group.

Cut off from the world except for brief meetings with her legal team and court appearances, the 76-year-old Suu Kyi faces a raft of charges that could see her jailed for more than a decade.

Her trial on charges she violated coronavirus restrictions during elections her party won last year, and for illegally importing walkie-talkies, was due to resume Monday after a two-month pause.

But Suu Kyi returned home after a pre-hearing meeting with her legal team as she had “car sickness”, her lawyer Min Min Soe said.

“She hasn’t gone anywhere by car in the last two months. That’s why she felt car sickness today… She said she needs to go back home to take a proper rest.”

“We are really worried about her health,” Min Min Soe added.
The lawyer said she understood that a doctor and nurse were on call at the compound where Suu Kyi is being held under house arrest.

Two prosecution witnesses failed to appear at Suu Kyi’s last hearing of the Myanmar trial in July after becoming infected with the coronavirus as Myanmar battled a third COVID-19 wave.

The country’s virus response has been hampered by a mass civil disobedience campaign that has seen thousands of doctors, volunteers and civil servants stop work to protest against the military.

Suu Kyi and her personal staff have been fully vaccinated against COVID-19 since being taken into military custody, her lawyer told AFP in July.

Journalists are barred from the proceedings against Suu Kyi, who also faces charges of sedition, accepting illegal payments of gold and violating a colonial-era secrecy law.

She was also hit with new anti-corruption charges, Min Min Soe said Monday, although the trial dates had not yet been set.

The junta has defended its power grab by alleging massive fraud during the 2020 elections that Suu Kyi’s National League for Democracy won by a landslide.