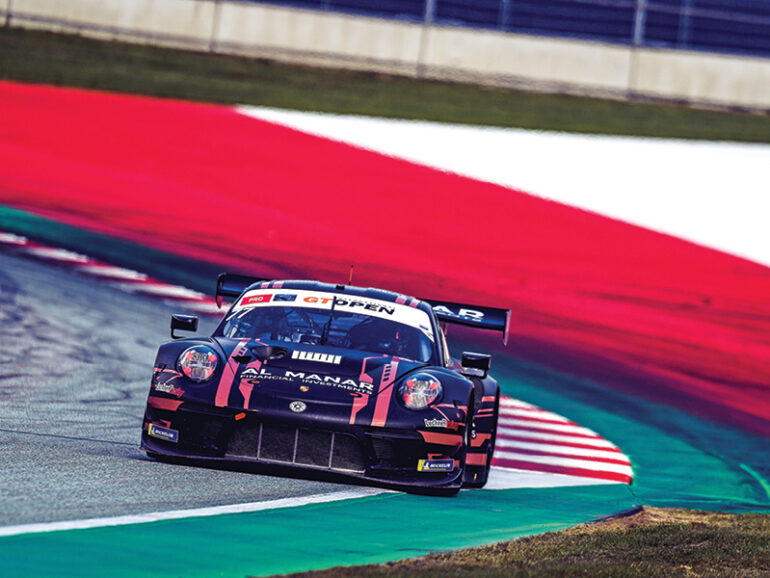 A day after Al Faisal al Zubair and Andy Soucek’s result of the first race of round five at the Red Bull Ring in Spielberg, Austria, was amended and they were pushed down to 12th from fourth, there was further disappointment for the Lechner Racing Team Porsche duo on Sunday.

Competing in the second race of round five of the 2021 International GT Open Series on Sunday, Oman’s Al Faisal and Spain’s Soucek had a strong start in their Porsche 911 GT3 R car with a P2 in qualifying session behind Inception Racing’s Charlie Eastwood and Sam De Haan in TF Sport Aston Martin.

However, a costly second pit stop for a flat tyre in the last 15 minutes of race two cost Al Faisal and Soucek a potential runner-up finish.

Al Faisal slipped to fourth on the opening lap but both drivers pushed themselves back into podium contention. Soucek was holding second place and closing in on eventual winner Sam De Haan when he was forced to pit again with a flat tyre. After slipping to ninth, he fought back to finish in seventh position.

A disappointed Al Faisal said, “Today was a very tough day for us. It was my best ever qualifying in endurance. We qualified P2 in front of some established drivers and I was happy with that. I dropped down at the start but maintained the fourth place.

“When I pitted for Andy and he came out in second place, it was really catching the leaders with 15 minutes to go. The time difference went down to six seconds but, unfortunately, we got a left rear puncture and that took us out of contention. The whole weekend is one to forget.”

Inception Racing’s De Haan and Eastwood secured victory by the margin of 9.72 seconds from Baptiste Moulin’s and Yuki Nemoto’s Lamborghini.
Driving the AKM Motorsport Mercedes, third-placed Nick Bastian and Florian Scholze overhauled the Vincenzo Sospiri Racing Lamborghini of Michele Beretta and Frederick Schandorff in the dying seconds of the race.
Eastwood started in front of Al Faisal in what looked set to be a damp and overcast race.

The Omani didn’t make the best of starts and soon slipped to fourth behind Eastwood, Basz and Schandorff.

Al Faisal pitted to be replaced by Soucek just after the half-hour mark and 20 laps with Eastwood and Basz out on the circuit, as Soucek rejoined in seventh.

With driver changes completed on the track, Soucek climbed to third and trailed the leading De Haan by just 8.752s heading into the final 22 minutes. Soucek passed Jedlinski to snatch second place on lap 24 and began to hunt down De Haan. He reduced the deficit to 6.753 seconds with 19 minutes to run but then was forced to pit again with a puncture. In the qualifying Eastwood claimed pole on Sunday morning. The Aston Martin stopped the clocks in 1min 28.072sec to pip Al Faisal to the top spot by 0.519 seconds.