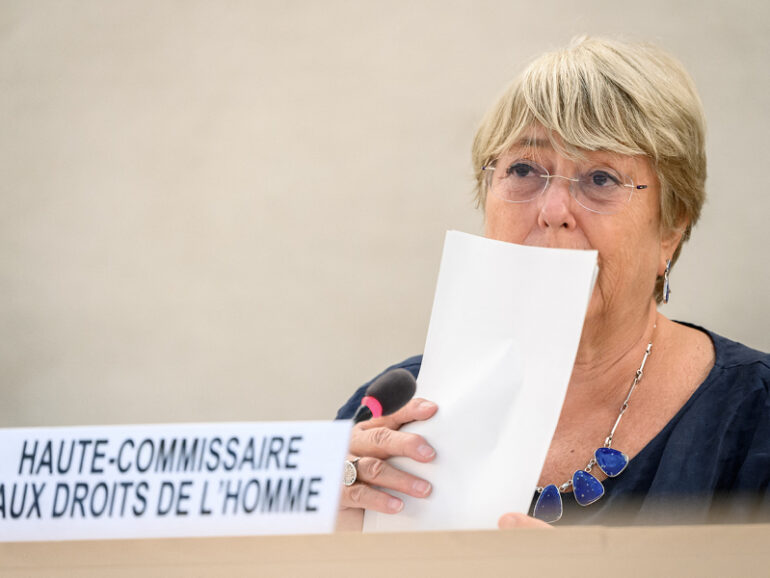 Geneva, Switzerland – The UN rights chief on Monday criticised the new Taliban interim government in Afghanistan, which is drawn exclusively from loyalist ranks and counts no women.

Speaking before the UN Human Rights Council in Geneva, Michelle Bachelet said she was “dismayed by the lack of inclusivity of the so-called caretaker cabinet, which includes no women and few non-Pashtuns.”

The announcement of the government last week was a key step in the Taliban’s consolidation of power over Afghanistan, following a stunning military victory that saw them oust the US-backed administration on August 15.

Notorious for their brutal and oppressive rule from 1996 to 2001, the Taliban had promised a more inclusive government this time.

However, all the top positions were handed to key leaders from the movement and the Haqqani network – the most violent faction of the Taliban known for devastating attacks.

Presenting an oral update on the rights situation in Afghanistan to the council, Bachelet stressed that most Afghans were eager to see an end to the decades of conflict and division.

“They long for peace and stability in a country where they and their children can prosper,” she said.

Most Afghans, she said, wanted to live in a country “where they can contribute to a governance system that encourages meaningful participation of women and youth, and brings together the country’s ethnic and religious communities.”

In her update, requested during a special council session on Afghanistan last month, Bachelet highlighted that the Islamist hardliners had pledged a more moderate brand of rule this time around, including assuring women’s rights within the framework of Islamic law.

But she said information received by her office, “which we assess to be well-founded, indicates that practice on the ground has often contradicted these stated commitments.”

She pointed in particular to “credible allegations of reprisal killings” of former members of the Afghan national security forces.

She also highlighted arbitrary detentions of people who worked for previous administrations, including some who were later “found dead”.

And she decried multiple allegations of house-to-house searches for former officials, raids on offices of some civil society groups, as well as “increasing violence against protesters and journalists”.

Bachelet voiced particular concern for the situation of women and girls.

“In contradiction to assurances that the Taliban would uphold women’s rights, over the past three weeks women have instead been progressively excluded from the public sphere,” she lamented.

The UN High Commissioner for Human Rights reiterated her appeal to the council to set up a “dedicated mechanism” to monitor the rights situation in Afghanistan in a bid to ensure accountability for violations.

Rights groups and some countries have also voiced hope that the current council session, which lasts until October 8, will go further than the special session last month, which stopped short of ordering an international investigation into abuses in the country.

Iran too on Monday charged that the Taliban’s interim government is not representative of the country’s population, an AFP report from Tehran said.

It “is certainly not the inclusive government that the international community and the Islamic Republic of Iran expect,” said foreign ministry spokesman Said Khatibzadeh.

“We really have to wait and see how the Taliban respond to international demands,” he added, speaking at a news conference in Tehran.

The Taliban last week announced its interim government which was made up entirely of men, most of them ethnic Pashtuns, and dominated by veteran members of the Islamist fundamentalist movement.

Iran, which shares a more than 900km border with Afghanistan, already hosts nearly 3.5mn Afghans and fears a new influx of refugees.

Iran has had a contentious relationship with the Taliban during their 1996-2001 rule of an Islamic Emirate of Afghanistan, which it has never recognised.

Tehran had nevertheless seemed to be moving towards a rapprochement with the Taliban in recent months.

However, on September 6, Tehran “strongly” condemned the Taliban’s assault on Afghanistan’s Panjshir Valley, the last stronghold of resistance to the movement, which claimed to have taken complete control of the area.