‘Oman a hub of tranquility in troubled region’ 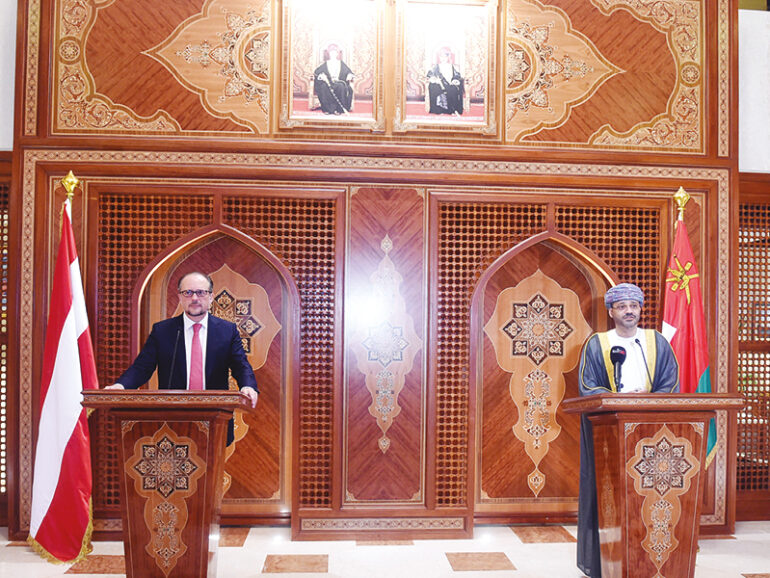 Muscat – Oman and Austria have stressed on the importance of constructive dialogue in order to solve various regional and international issues and crises.

This was said during a joint press meeting held by H E Sayyid Badr bin Hamad al Busaidi, Foreign Minister, and Alexander Schallenberg, Federal Minister for Europe, Integration and Foreign Affairs of the Republic of Austria, at the Foreign Ministry on Monday.

H E Sayyid Badr spoke about the Yemeni crisis, indicating that the sultanate will always support peace and security in the region, stressing that all concerned parties have “become keen and convinced of the importance of ending this crisis for the sake of the stability of Yemen, its people and the region in general”.

H E Sayyid Badr spoke on the memorandum of understanding (MoU) for political consultations signed between the two countries, which he said is a new stage for the development of
bilateral relations between the two sides.

He called on the trade delegation accompanying the Austrian minister to review the investment opportunities available in the sultanate, and the advantages and incentives offered by Oman Vision 2040 in various sectors.
For his part, Schallenberg said that the role played by Oman on various regional issues has become ‘stark and clear’, stressing that the sultanate and Austria support the efforts of the UN envoy to Yemen and have identical views on many issues in the region, such as the Yemeni crisis and the Iranian nuclear issue and the situation in Afghanistan.

He described Oman as “a hub of tranquility in an eventful and sometimes troubled region”.

“Great meeting my friend, FM Sayyid Badr, in beautiful Muscat. Austria and Oman share a strong belief in diplomacy and multilateralism. Thought-provoking exchange on Yemen, JCPoA, Afghanistan,” Schallenberg tweeted.
JCPoA is the acronym used for the Joint Comprehensive Plan of Action, commonly known as Iran nuclear deal, signed in Vienna on July 14, 2015, between Iran and the five permanent members of the United Nations Security Council plus Germany together with the European Union.

The Austrian minister praised Oman’s Vision 2040 and the investment opportunities it contains, stressing the keenness of Austrian companies to take advantage of the available opportunities and incentives offered by the sultanate to investors.

Earlier in the day, the two ministers signed an MoU on political consultations between Oman and Austria and inaugurated the new premises of the Austrian Embassy in Muscat.