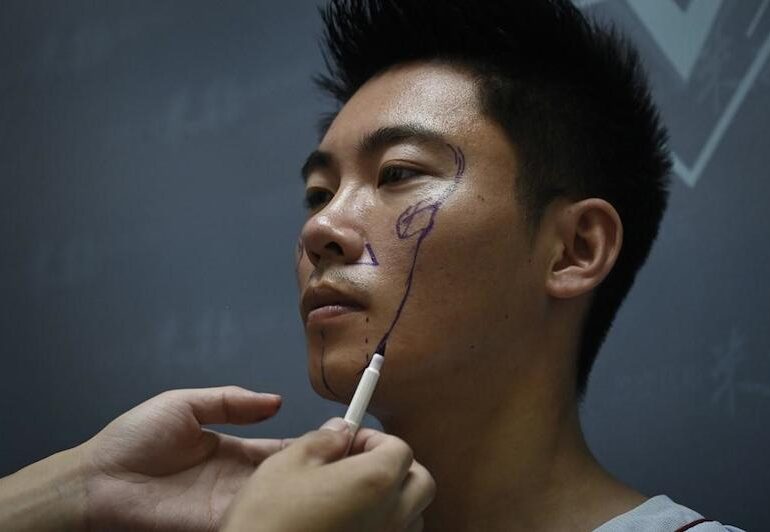 Worried his appearance would detract from opportunities in China’s competitive society, Xia Shurong decided to go under the surgeon’s knife to reshape his nose – one of millions of young men in the country turning to cosmetic surgery.
The 27-year-old researcher wanted medical procedures to transform his look from an ‘engineering geek’ to something he thinks will boost his life chances.
Beauty standards in China can be exacting, from pressure over skin tone, eye and nose shape to the controversial ‘little fresh meat’ look – a buzzword used to describe handsome young men with delicate features.
“I feel I should be ‘fresh meat’ at my age, but I already look like a middle-aged uncle,” explained Xia. AFP met Xia in Beijing as he was preparing for surgery to plump out his features. He had already spent 40,000 yuan (US$6192) on a face-filler procedure earlier this year.
“I grew up in the countryside – my face was dark, my skin was bad, I thought my appearance was not good, in general,” he said, adding that he had long planned to rework his face. “I always felt a sense of inferiority,” he added.
The intense popularity of Chinese social media – rife with trends in cosmetic surgery, beauty tutorials and advice on how to become beautiful, has added to the pressure for many.
Growing numbers of educated men in China are opting for aesthetic and surgical procedures to give them the edge.
According to iResearch, around 17 per cent of male white collar workers in China have had cosmetic treatments and the vast majority of men had their first procedure before the age of 30.

Xia Zhengyi, the doctor carrying out Xia’s procedure, says he has seen an increase in young men coming to him for procedures.
“Surgery can change the facial expression and give people a feeling of confidence, which is good for your relationships with people,” he said.
Rose Han, from the BeauCare Clinics investment group, said male civil servants opt for procedures because they worry looking tired or old may mean missing out on promotions.
Men in their twenties were most keen on eye and nose reconstruction surgery, according to surgery app So Young, which cited a survey of their 8.9mn active monthly users.
“It’s not like buying a Gucci handbag – it is giving yourself an opportunity. Confidence will bring changes to my work and life,” said Xia.
China’s average national disposable income has more than doubled since 2010, according to government data, and increased wealth among China’s middle classes has also fuelled interest.
Zhang Xiaoma left his job at an IT company to become a full-time social media influencer after sharing his own experience of cosmetic surgery.
“You can do more on-camera jobs if you become more attractive,” Zhang said.
His procedures include ‘elf ears’ – a procedure that fills ears with hyaluronic acid to make them look more prominent while the face appears smaller. This became popular after a social media star documented the procedure and it went viral.
Model Nai Wen has had more than 60 procedures on his face, including laser treatments, and believes cosmetic surgery changed his fate.
“It is as convenient as a face mask – it’s really amazing that you can increase your age but not grow old.” he told AFP during a shoot.

China’s cosmetic surgery industry is now worth 197bn yuan (US$30bn) – up from 64.8bn yuan in 2015, according to iResearch. But the rapid growth in demand comes at a time when authorities are concerned the nation is facing a ‘masculinity crisis’.
Beijing has criticised the ‘little fresh meat’ look, and has proposed an increase in physical education classes for boys to encourage a more traditional form of masculinity in society.
Earlier this month, the broadcast regular ordered TV channels to resist showing abnormal characters such as ‘sissy’ men on screen.
There are also safety and quality concerns – the National Consumer Association logged more than 7,200 complaints relating to the cosmetic surgery industry.
Xiaoran, a 33-year-old online influencer, died of a serious infection after undergoing liposuction, state media reported in July. The clinic where she had her surgery has since been closed, reported the state-run Global Times.
And pictures shared by actor Gao Liu this year went viral on Chinese media, showing dead, blackened flesh on her nose after cosmetic surgery went wrong.
Critics believe there needs to be better regulation.
Model Nai admits there is a risk that cosmetic surgery becomes ‘addictive’.
“You can’t accept an ugly self,” he added. After his hour-long surgery in Beijing, Xia examines his face in a hand-held mirror, turning from side to side. “It feels a little bit different, but it isn’t quite as I expected,” he admitted.
“I think achieving the perfect look may take some time.”