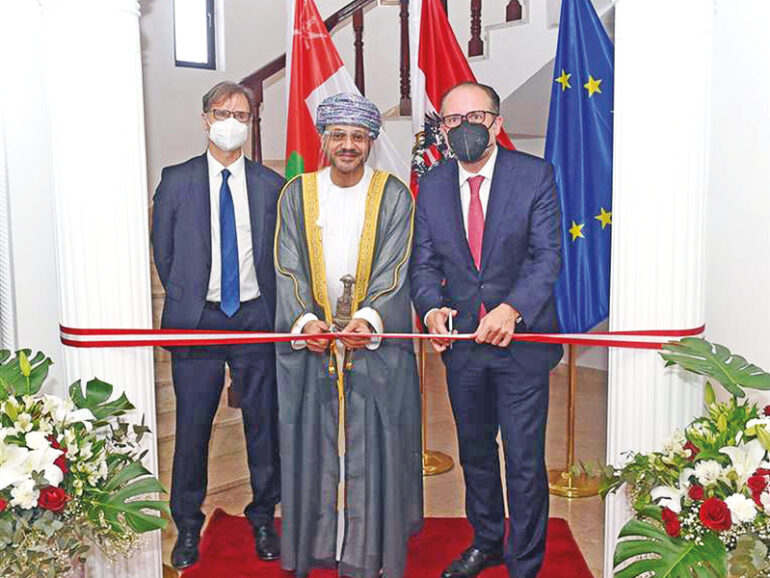 Muscat – Alexander Schallenberg, Federal Minister for Europe, Integration and Foreign Affairs of the Republic of Austria, on Monday inaugurated the new premises of the Austrian Embassy in Muscat, in the presence of Oman’s Foreign Minister H E Sayyid Badr bin Hamad al Busaidi.

Schallenberg said that the opening of the embassy premises is an important step in order to activate relations between the two friendly countries, stressing that the embassy will work to enhance aspects of joint cooperation, especially in commercial fields.

“Opening an embassy for sure is the most beautiful duty as a foreign minister. There is much potential for our cooperation, including in the spheres of economy and tourism. I’m very much looking forward to further deepening our bilateral relations,” Schallenberg tweeted.

H E Sayyid Badr said that the opening of the embassy will contribute to strengthening the friendship and cooperation between the two countries in the cultural, tourism and commercial fields, and there is a desire on both sides to develop these relations and push them towards wider horizons.

Monday’s ceremony was attended by the head of the Protocol Department at the Foreign Ministry of Oman, the head of the minister’s office and a number of other officials in the ministry, besides the Austrian ambassador accredited to the sultanate, members of the embassy and the delegation accompanying Schallenberg.