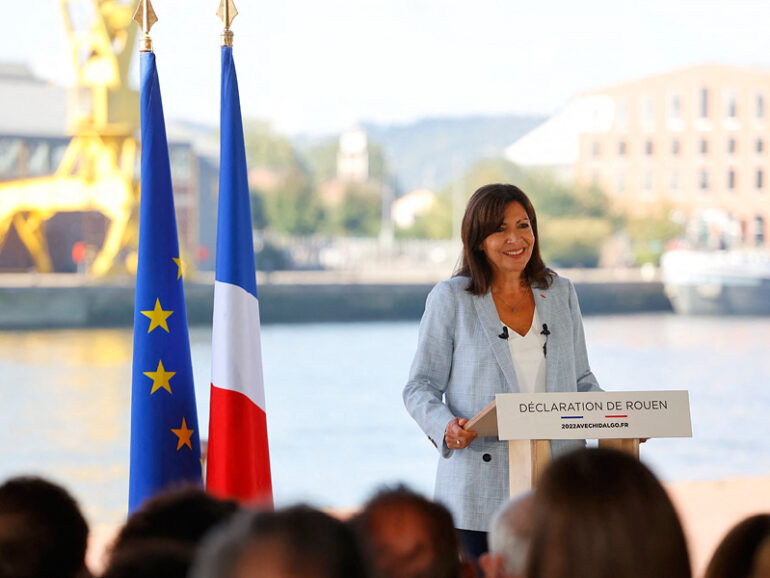 Rouen, France – The Socialist mayor of Paris, Anne Hidalgo, on Sunday announced plans to run for president in next year’s election, joining a growing list of challengers to centrist incumbent Emmanuel Macron.

The 62-year-old daughter of Spanish immigrants who fled Francisco Franco’s dictatorship is the hot favourite to win the nomination of the Socialist party.

But the first female mayor of Paris will need to expand her profile nationally to become France’s first woman president.

Minutes after her announcement, one of her rivals, far-right leader Marine Le Pen kickstarted her third presidential campaign in the southern city of Frejus.

Hidalgo chose the dockyards of the Socialist-run city of Rouen in the northwest for her announcement rather than the gilded backdrop of Paris city hall.

Paris mayor since 2014, she enters the race as a polarising figure whose campaign to squeeze cars out of the capital and make the city greener has divided residents.

Climate promises
In her speech, Hidalgo said her upbringing in the working class housing estates of Lyon showed how the French school system could help children overcome “class prejudice”.

But she warned that the French republican model, promising liberty, equality and fraternity, was “disintegrating before our eyes”.

“I want all children in France to have the same opportunities I had,” she said.

Polls currently show Hidalgo would garner only seven to nine percent in the first round of voting for president in April if picked to represent the Socialists.

She said one of her top priorities would be to transform France into a low-carbon economy, accusing Macron of failing in his climate pledges.

“He was supposed to protect our planet but he turned his back on the environment,” she said.

Macron has yet to confirm that he will seek a second term, but he is widely expected to do so.

‘Violation’ of freedom
The election is expected to come down to another duel between Macron and far-right leader Marine Le Pen, whom Macron defeated in 2017.

In typical barnstorming mode, the 53-year-old Le Pen told supporters she would clean up “parts of France that have been Talibanised” – a reference to the presence of radical Islamists in some high-rise housing estates.

She also made overtures to the many thousands who stage weekly protests against the COVID “health pass”, which requires people to show proof of vaccination or a negative test to get served in restaurants, take long-distance trains and a host of other services.

Le Pen called it “a disproportionate violation of the right to freedom”.

Her combative rhetoric masked disquiet in her National Rally after poor showings in recent regional elections.

On Sunday, she handed the reins of the party to her young deputy Jordan Bardella for the duration of the presidential campaign.

Analysts have warned of potential voter fatigue with Le Pen after two failed campaigns in 2012 and 2017.

Her party has pointed to Francois Mitterrand as an example of a politician who triumphed on his third attempt.

Le Pen could however be hobbled by a rival far-right candidacy from controversial TV pundit and author Eric Zemmour.

Zemmour, who has built up a loyal following with diatribes against migration and the Muslim headscarf, is rumoured to be planning to use a forthcoming book tour to throw his hat in the ring.